On Wednesday afternoon via Twitter, President Donald Trump announced he would end his American Manufacturing Council. 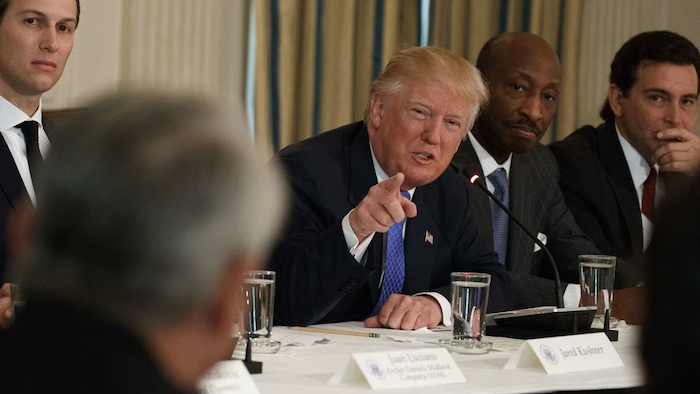 On Wednesday afternoon via Twitter, President Donald Trump announced he would end his American Manufacturing Council, as well as the separate Strategic and Policy Forum.

The decision to disband the manufacturing council followed the resignation of eight members to protest the president’s controversial remarks on last weekend’s violence in Charlottesville, Virginia.

Specifically, President Trump stated Tuesday that “blame” was “on both sides” of a Charlottesville white nationalist rally that resulted in the death of counter-protester Heather Heyer, a 32-year-old paralegal.

Established in January, the American Manufacturing Council began with 28 prominent business leaders who would serve as advisors to the Trump administration as it sought to revive the manufacturing industry.

However, according to the American Federation of Labor and Congress of Industrial Organizations (AFL-CIO) president Richard Trumka, the council “never met” and was “totally ineffective.”

Both Trumka and the Chief of Staff for the AFL-CIO, Thea Lee, resigned from the manufacturing council on Tuesday.

In a joint statement, Trumka and Lee said:

“ It's clear that President Trump's Manufacturing Council was never an effective means for delivering real policy that lifts working families and his remarks today were the last straw. We joined this council with the intent to be a voice for working people and real hope that it would result in positive economic policy, but it has become yet another broken promise on the President's record. From hollow councils to bad policy and embracing bigotry, the actions of this administration have are consistently failed working people.”

In addition to Lee and Trumka, the council members who resigned prior to the president’s disbanding were: Kevin Plank of Under Armour, Brian Krzanich of Intel, Scott Paul of the Alliance for American Manufacturing, Inge Thulin of 3M and Denise Morrison of the Campbell Soup Company.

Tesla CEO Elon Musk left the panel earlier in the year when the Trump administration abandoned the Paris climate agreement.