As people cut back on soda, the two beverage giants are pushing smaller cans and bottles they say contain fewer calories and induce less guilt. The goal is to offset falling consumption with packages that cost more per ounce and are appealing for their novelty and portion control. 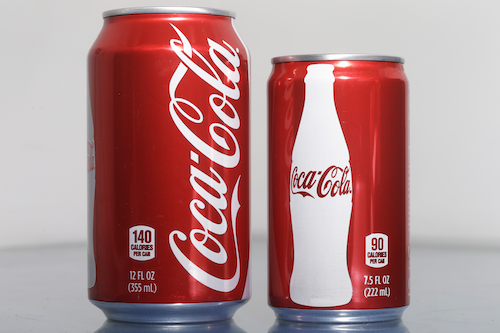 NEW YORK (AP) — After watching Americans suck down Big Gulps for decades, Coke and Pepsi are realizing less could be more.

As people cut back on soda, the two beverage giants are pushing smaller cans and bottles they say contain fewer calories and induce less guilt. The goal is to offset falling consumption with packages that cost more per ounce and are appealing for their novelty and portion control.

That means 7.5-ounce "mini-cans" and 8-ounce and 8.5-ounce glass and aluminum bottles are taking up more space on supermarket shelves. The cans and bottles have been around for a few years, but Coke and Pepsi are making them more widely available and marketing them more aggressively. As part of its "Share-a-Coke" campaign that printed popular names on cans and bottles last year, for instance, Coke says it distributed a million mini-cans.

The focus on pushing an array of smaller packages signals a shift from the past couple decades, when beverage makers measured success by the sheer volume of soda they sold. Yet soda consumption has declined persistently in recent years, with public health officials blaming it for making people fat and calling for special taxes and even warning labels on cans.

Soda hit its peak in 1998, when Americans on average drank the equivalent of 576 cans of it a year, according to data from the industry tracker Beverage Digest. That figure was down to about 450 cans a year in 2013.

Instead of fighting what seems to be a losing battle, Coke and Pepsi are pushing smaller cans and bottles that give their products a sense of newness among the growing proliferation of beverage choices. The companies also say the tiny sizes cater to people's desire for more modest servings.

"Coca-Cola is so delicious, but it's like sun tanning or cigarettes — they're these wonderful things that we now know are horrible for us," said Lauren Utvich, a 31-year-old food stylist in New York, who bought the Coke mini-cans when she first spotted them.

Utvich doesn't normally drink soda, but she likes that the mini-cans turn Coke into a relatively guiltless treat. But that's not the only reason she bought them. "Let's be honest. I like them because they're freaking adorable," said Utvich, who didn't pay attention to how much they cost.

During a presentation in November, Coke's North American president Sandy Douglas said the health and wellness trend has set up "a tremendous opportunity for the Coca-Cola brand with our smaller packages."

He noted a regular 12-ounce can of Coke on average sell for 31 cents. By comparison, a 7.5-ounce mini-can sells for 40 cents. That translates to 2.6 cents-per-ounce for a regular can, versus 5.3 cents-per ounce for the mini version.

Coca-Cola said that while it may be selling less soda, smaller packs are pushing up revenue. Sales of Coke's smaller sizes — which include a 1.25-liter bottle as an alternative to the 2-liter bottle — were up 9 percent last year through October, according to the presentation by Douglas. By comparison, sales of its 12-ounce cans and 2-liter bottles edged up 0.1 percent.

That doesn't mean Coke and Pepsi are abandoning their more generous servings, which still dominate the industry. And it's not clear how big the appetite for the newer cans and bottles can grow over time. In 2013, mini-cans accounted for 1.1 percent of sales volume in supermarkets, according to Beverage Digest. But they accounted for 2.4 percent of sales dollars, more than double their volume share.

Bonnie Herzog, a Wells Fargo beverage industry analyst, said the smaller options are part of how Coke is repositioning itself amid changing habits around soda. She noted the company is also pushing Coke Life, a reduced-calorie drink sweetened with a mix of sugar and stevia.

"It's responsible and it's realistic," Herzog said, noting the smaller sizes are marketed as "moments of pleasure" people don't have to give up.

Soda's bad reputation, after all, is in part the result of mushrooming sizes. For decades, Coke was sold primarily in 6.5-ounce glass bottles. In 1955, the company started introducing larger servings after Pepsi-Cola marketed a bigger glass bottle, according to Dan Deane, president of the Coca-Cola Collectors Club.

Eventually, he noted Coke sold a 3-liter plastic bottle in some regions.

Fountain sodas got bigger, too. In 1976, 7-Eleven introduced its 32-ounce Big Gulp, followed by a Double Gulp that holds 64 ounces, or a half gallon of liquid. A small drink at McDonald's today is 16 ounces, while a large is 30 ounces. But the bigger sizes that helped enrich Coke and Pepsi also backfired, with many now seeing it as a culprit for the nation's obesity rates.

Even as Coke and Pepsi fight such measures through their industry lobbying group, they're embracing the mantra of moderation.

This fall, Coke, Pepsi and Dr Pepper pledged at the Clinton Global Initiative to slash calorie consumption from beverages in the U.S. by 20 percent over the next decade. It sounds dramatic, but calories from drinks were falling anyway as people move away from soda on their own in favor of options like bottled water.

One of the ways the companies promised to achieve their goal: Smaller sizes.