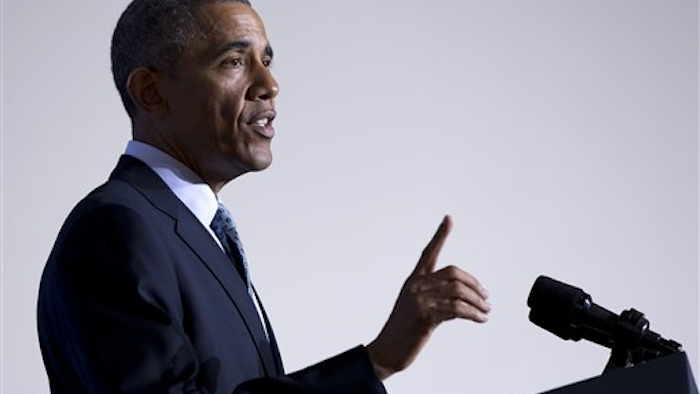 Obama said identity theft is a growing problem that costs billions of dollars and can "ruin your life." He said the age of technology and digital innovation has created enormous vulnerabilities for the U.S. and cited the recent hack on Sony Pictures Entertainment as an example.

"This is a direct threat to the economic security of American families and we need to stop it," Obama said in a speech at the Federal Trade Commission. "If we are going to be connected, we need to be protected."

Just as Obama finished speaking, the Twitter and YouTube accounts for U.S. Central Command were taken over by hackers who claimed to be working on behalf of Islamic State militants.

Obama, previewing a push he plans to make in the State of the Union address next week, wants Congress to pass legislation called the Personal Data Notification and Protection Act, which would require companies to inform customers within 30 days if their data has been hacked.

Recent hackings at retailers including Target, Home Depot and Neiman Marcus have exposed the lack of uniform practices for alerting customers in the event of a breach. The White House has blamed last month's hacking at Sony Pictures Entertainment on North Korea and responded with new sanctions against the isolated nation.

Obama says every state currently has its own policy on when companies must notify consumers of a breach and that there should be a single standard across the country and baseline protections across industries. The legislation would also make it a crime to sell customers' identities overseas.

Obama said the United States was founded in a "spirit of privacy that should not be breeched."

Obama also called for more free access to all consumer credit rating services. While customers can get annual credit reports free once a year, FICO credit scores typically cost money to obtain, although some banks have been offering them free to customers.

He also wants to prevent companies from selling student data to third parties and from using information collected in school to engage in targeted advertising.

The Student Digital Privacy Act would prohibit companies from selling student data to third parties, a move spurred by the increased use of technology in schools that can scoop up personal information.

A White House official said the proposed bill is based on a California statute pushed by Common Sense Media, a group that promotes privacy. The organization said the proliferation of online platforms, mobile applications, cloud computing and other technology allows businesses to collect sensitive data about students including contact information, academic records, and even what students eat for lunch or whether they ride the bus to school.

It's unclear whether the new Republican-led Congress will take up Obama's legislative proposals.