During an hourlong question-and-answer session Monday Fiat Chrysler CEO Sergio Marchionne said that high leasing levels aren't a threat to auto sales and that his company can make a good case to get the U.S. government to ease fuel economy requirements. 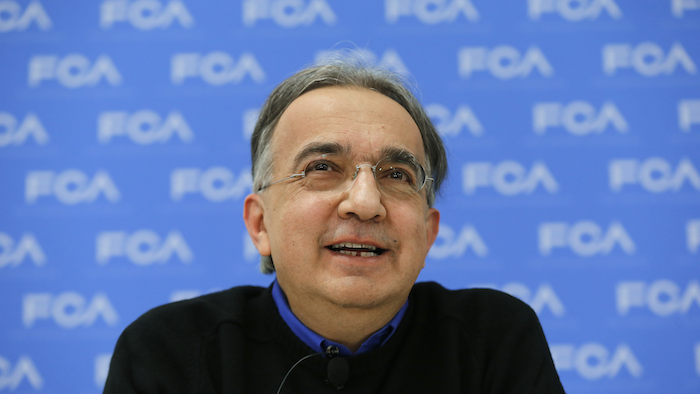 DETROIT (AP) — The family-hauling minivan is not dead in the eyes of Fiat Chrysler CEO Sergio Marchionne, who says he hopes to roll out a new one at next year's North American International Auto Show in Detroit.

Marchionne, speaking to reporters at the show, also said auto stocks are valued low by the markets because companies spend too much money building engines, transmissions and other items that could be consolidated.

He also said during an hourlong question-and-answer session Monday that high leasing levels aren't a threat to auto sales, that his company can make a good case to get the U.S. government to ease fuel economy requirements.

Here's how Marchionne answered five questions during the session. Answers are edited for length and clarity:

Q: When will we see a new minivan?

A: It is my sincere hope that you'll see it here on the stand next year. It will be the most technologically advanced minivan ever. The company is spending $2 billion on engineering, design and manufacturing for the new van, which likely would be built at the current minivan plant in Windsor, Ontario. The van will have gas-electric hybrid technology to boost fuel economy, and it will likely be named the Town & Country after the current Chrysler minivan. He expects a new minivan to go on sale in the first quarter of 2016, although it hasn't been given final approval.

Q: What impact does the recent drop in gas prices have on your plans to roll out fuel-saving technology? Will you ask the U.S. government to ease back on fuel economy requirements when they are reviewed in 2017?

A: Gas prices near $2 per gallon won't change the company's technology plans. A good argument can be made to ask the government about slowing fuel economy and emissions standards to allow for a more rational, more reasonable management of this process. With low gas prices, the big question is whether people will pay for the technology to allow automakers to meet the requirements. He says customers may go for less-expensive and less-efficient alternatives. Chrysler plans more electric and hybrid vehicles to comply. Fuel economy regulations require the fleet to average 54.5 miles per gallon by 2025.

Q: Is Fiat Chrysler in talks with any other companies about mergers or consolidation?

A: "There are no talks going on now." The industry's stocks are valued low by the markets because individual automakers spend too much developing engines, transmissions and new technologies on their own. He expects more "targeted collaboration" between automakers, but also sees resistance from other executives. "We spend massive amounts of money on projects which if unsuccessful could end the future viability of our business."

Q: Leasing is running a near-record 26 percent of U.S. auto sales. Do you see that and other transportation alternatives such as Uber and Zipcar as threats to car ownership?

A: I'm not 100 percent sure of the impact on all these other things that are redefining the driving experience. I think the American market in particular has a core part of the business that will be untouched. I think distances here dictate a much more personal relationship between the owner and the car. So I think all the threats are grossly exaggerated.

Q: Do you still want to end the two-tier wage system in the upcoming contract talks with the United Auto Workers? New hires made about half the $28 per hour made by longtime workers.

A: You cannot have two classes of economic packages for people that do the same work. It's almost offensive. I understand the impact on our cost structure, but we need to find a way to make that go away. The best thing to do is to grandfather the old ones, freeze them, and get everybody else on a tier two in a way that in a good year they can make as much as the tier one does. But if I'm having a bad year we all share the pain.