The world's energy-related carbon dioxide emissions rose 1.4 percent in 2012 to a record high of 31.6 billion tons, even though the U.S. posted its lowest emissions since the mid-1990s, according to the International Energy Agency's World Energy Outlook report. 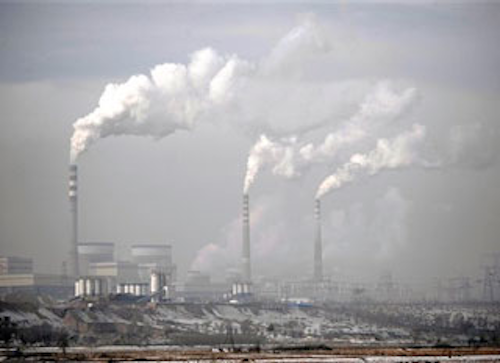 STOCKHOLM (AP) — The world's energy-related carbon dioxide emissions rose 1.4 percent in 2012 to a record high of 31.6 billion tons, even though the U.S. posted its lowest emissions since the mid-1990s, the International Energy Agency said Monday.

In its annual World Energy Outlook report, the Paris-based IEA said top carbon polluter China had the largest emissions growth last year, up 300 million tons, or 3.8 percent, from 2011. Still, the increase was among the lowest seen in a decade as China continues to invest in renewable energy and energy efficiency.

The agency said the energy sector accounts for about two-thirds of global emissions of CO2 and other greenhouse gases, which scientists say are fueling climate change.

Global climate talks are aimed at keeping the temperature rise below 2 degrees Celsius (3.6 F) compared with pre-industrial levels. The IEA found the world's on track for an increase of 3.6-5.3 C (6.5-9.5 F).

"Climate change has quite frankly slipped to the back burner of policy priorities. But the problem is not going away — quite the opposite," said IEA Executive Director Maria van der Hoeven.

Climate scientists have warned that the global temperature rise could have catastrophic consequences such as flooding of coastal cities and island nations, disruptions to agriculture and drinking water, and the spread of diseases and the extinction of species.

The IEA report, presented in London, said emissions could be reduced significantly by 2020 by improving energy efficiency in buildings industry and transport, limiting the use of coal-fired power plants, halving the oil and gas industry's release of methane, and phasing out fossil fuel subsidies.

Some of those measures are being implemented in individual countries around the world, but governments are struggling to reach a global agreement that would make such actions binding.

Climate negotiators meeting this week in Bonn, Germany, are haggling over the content of a global climate pact that is supposed to be adopted by 2015. The main sticking point is how to divide the burden of emissions cuts between developed and developing countries.

Industrialized countries want emerging economies like China, India and Brazil to take on bigger responsibilities, while the developing countries stress the historical responsibilities of long-time carbon polluters Europe and the United States.

The IEA report said developing countries now account for 60 percent of global emissions from energy, up from 45 percent in 2000.