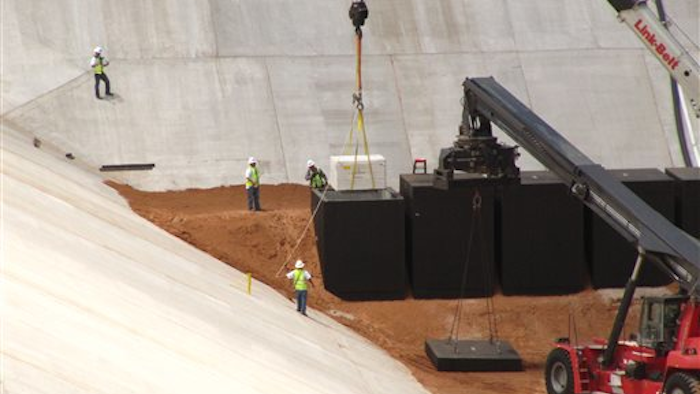 The first two containers carrying radioactive waste from Los Alamos National Laboratory in New Mexico were placed into an 8-inch-thick, reinforced concrete canister at the bottom of a new burial site.

"We wanted to be a one-stop shop with everything in," Waste Control Specialists President Rod Baltzer told U.S., Texas and New Mexico officials at a ribbon-cutting ceremony. "We're proud to have a large and very robust complex."

The 90-acre site for federal waste is part of the company's 1,380-acre operation near Andrews and close to the New Mexico border. Waste Control Specialist began accepting low-level radioactive waste last year from Texas and Vermont members of a compact, and about three dozen other states. That waste is buried at a 30-acre site at the operation.

Also buried at Simmons' massive dump are PCBs from the Hudson River in New York and Cold War-era radioactive waste from a shuttered weapons plant in Ohio, where purified uranium metal was processed for use in reactors to produce plutonium for nuclear weapons from the 1950s until 1989.

As many as two shipments a week will come from the New Mexico laboratory, officials said.

Company spokesman Chuck McDonald said the Los Alamos waste is derived from nuclear materials stored at the laboratory for decades. After a large wildfire lapped at the edges of lab property in summer 2011, New Mexico Gov. Susana Martinez identified removal of the waste as a top priority. The goal is to remove 3,706 cubic meters of Los Alamos waste by June 30, 2014.

"This facility here today is going to get us a step closer to meeting that goal," Ryan Flynn, secretary of the New Mexico Environment Department, said.

Environmental groups have long worried about the site's geology and contamination of nearby underground water sources. However, the company says the site about 375 miles west of Dallas is safe.

Waste Control has spent nearly $500 million to open the dump. In 2009, the state issued two licenses to the company to bury low-level radioactive waste, making it the nation's only dump for all classes — A, B and C — of nuclear debris and the first low-level site to open in 30 years.

One license pertains to the Texas and Vermont compact that allows for disposal of radioactive materials such as uranium, plutonium and thorium from commercial power plants, academic institutions and medical schools. In 2001, though, Texas lawmakers approved allowing low-level radioactive waste from 36 other states to be buried in West Texas.

The Texas Low-Level Radioactive Disposal Compact Commission looks at petitions to bury waste from the compact states and the three dozen other states on a case-by-case basis.

The other license deals with similar materials from sites run by the DOE, including Los Alamos and Hanford Site in Washington state and other federal facilities.

Simmons, who did not attend the ceremony and is one of the world's wealthiest men, has given Republican Rick Perry's campaigns $1.1 million during his time as Texas' governor. The governor is responsible for appointing environmental commissioners.

The West Texas site was picked in part because of a layer of red clay that proponents say is almost impermeable, and because of the arid climate. Rain had been scarce in the area until Wednesday night, when storms dumped rain and baseball-sized hail. Baltzer poked fun at the unusual weather.

"The area is known for its lack of rainfall, give or take last night," he said.