Seattle's tunnel-boring Bertha has started digging into soil about 80 feet below street-level along the city's waterfront. 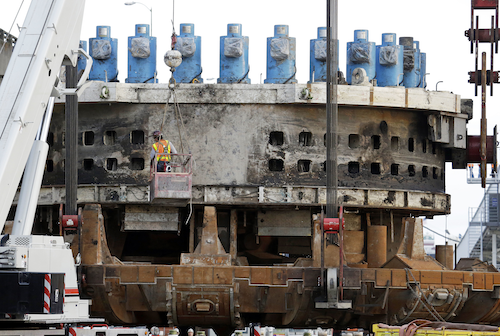 A worker in a basket looks over a 2,000-ton section of a tunnel boring machine known as "Bertha." (AP Photo/Elaine Thompson, File)

Seattle's tunnel-boring machine has moved past the concrete walls that make up a repair pit and has started digging into soil about 80 feet below street-level along the city's waterfront.

After being out of commission for about two years, the machine called Bertha has tunneled about 73 feet and installed 12 concrete tunnel rings since it started moving again on Dec. 22, Chris Dixon, program manager for the contractor Seattle Tunnel Partners, told reporters on a conference call on Thursday.

"Things are going really well — according to plan," Dixon said. "The repairs were successful and the machine is performing to our expectations."

Building a tunnel under Seattle was the preferred choice to replace the Alaskan Way Viaduct when it was damaged in a 2001 earthquake. But the machine broke down in late 2013 and it took until the end of 2015 to get it moving again.

The original completion date for the new Seattle tunnel was the fall of 2015. Now that the machine has been repaired and is moving again, Dixon said they'll finish the tunneling phase by January 2017 and the double-decker highway project will open to traffic in April 2018 — almost three years late. 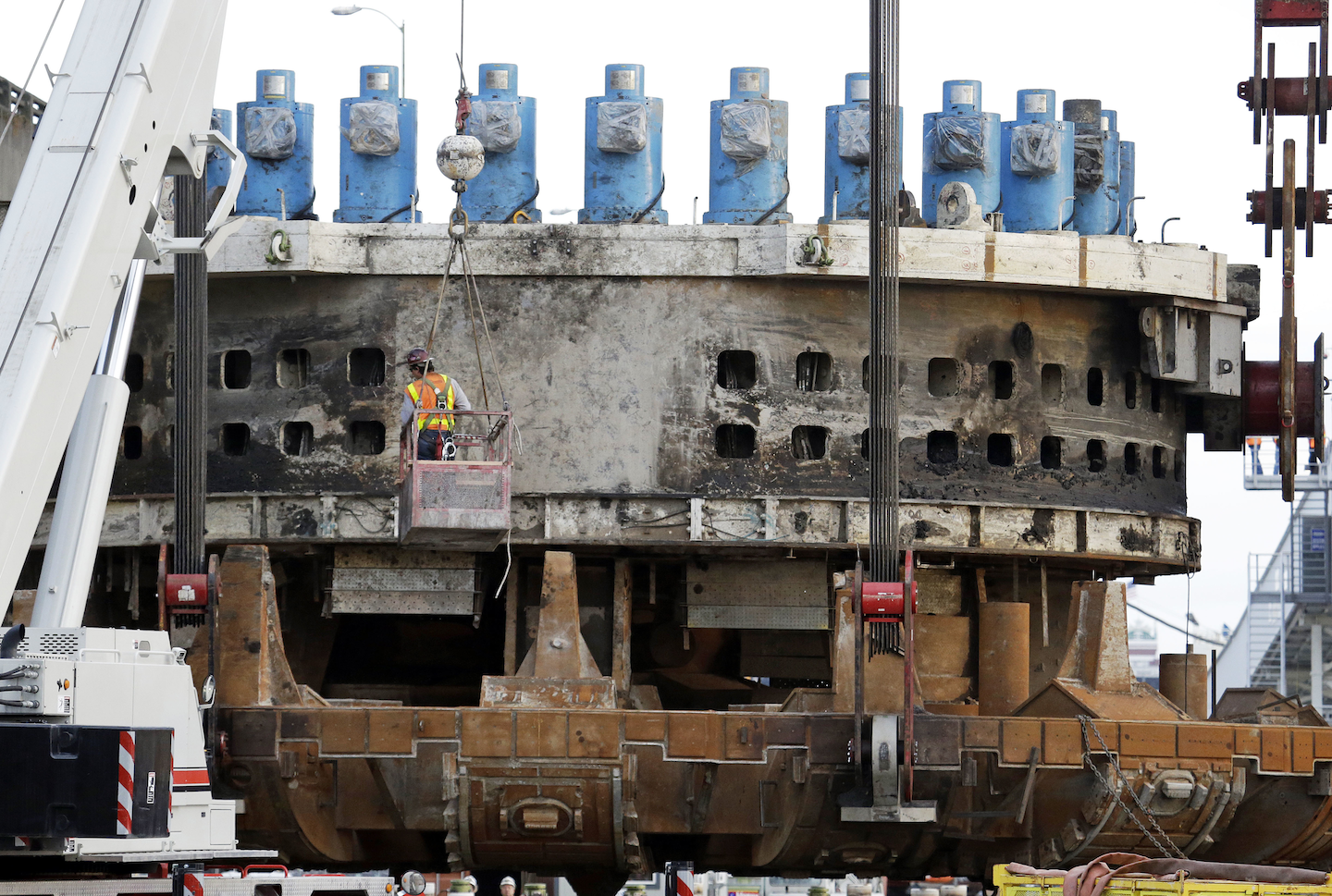 A worker in a basket looks over a 2,000-ton section of a tunnel boring machine known as "Bertha." (AP Photo/Elaine Thompson, File)

The cause of Bertha's breakdown is in dispute. Seattle Tunnel Partners and the Washington State Department of Transportation have filed competing claims in court so the ultimate cost and responsibility for the delay will likely be resolved by a judge.

In order to repair the damages, the contractor dug a concrete-ringed access pit so workers could reach and fix the front of the machine.

Once repairs were done, the first step was to mine into and out of the access pit. Bertha accomplished that phase late Wednesday and spent Thursday digging toward South Main Street near Pier 48.

They'll continue digging through native soils until they reach a point called Safe Haven 3 about 400 feet away at the end of January when they'll conduct a maintenance stop.

Transportation officials plan to shut down the busy Alaskan Way Viaduct, or State Route 99, when Bertha reaches it in March. 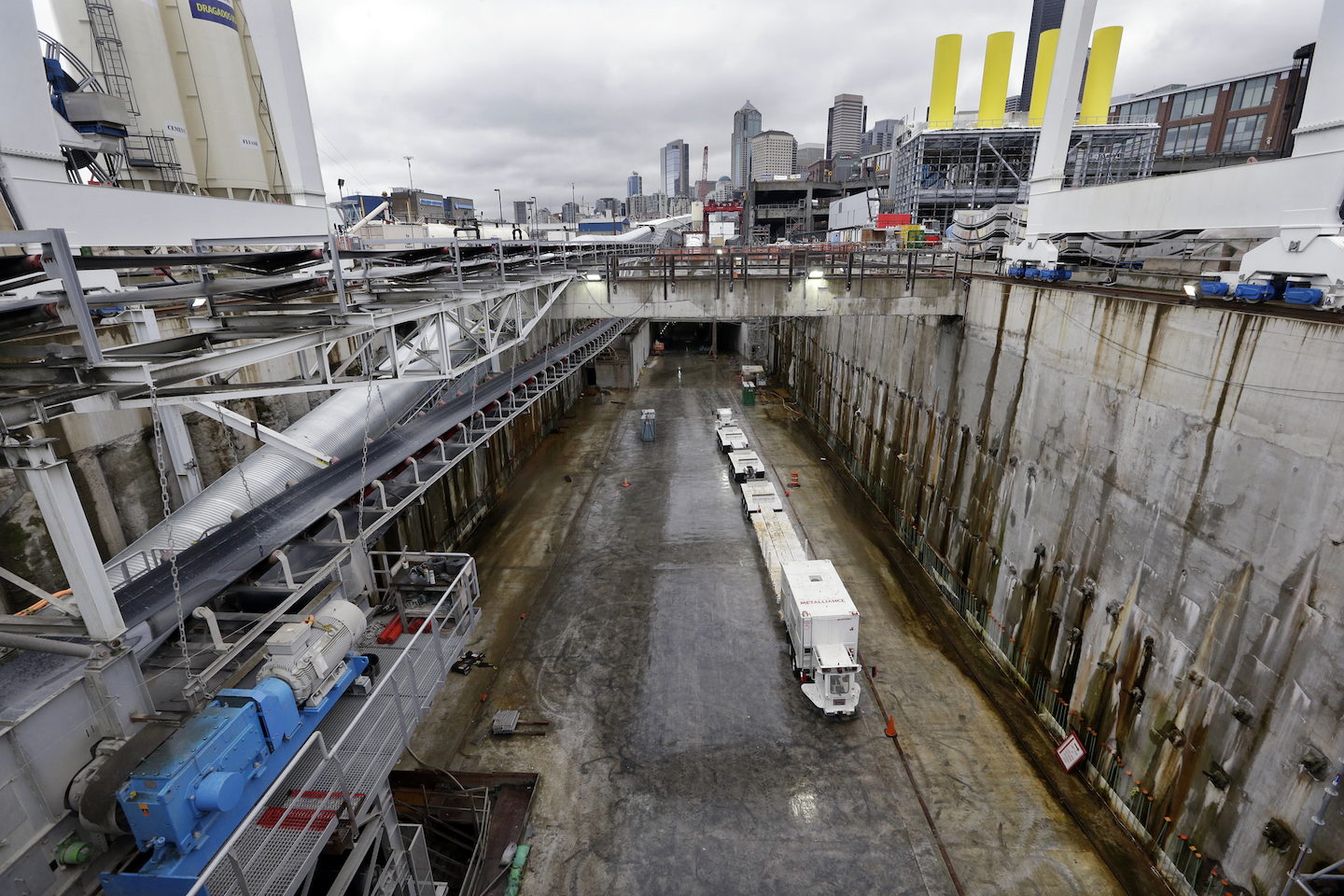 The south end of the cut-and-cover portion leading to the giant tunnel. (AP Photo/Elaine Thompson)

Todd Trepanier, a state transportation administrator for the project, said the two-week closure will be an inconvenience for commuters but is necessary for officials who plan to monitor the structure "to see if anything is happening because of tunneling underneath it."

Dixon said they have instruments monitoring buildings, sewer lines, water mains and other structures both above and underground to see if the digging is causing any sinking or movement.

When asked if the transportation department has a contingency plan in case the worst-case scenario happens and the viaduct must be closed permanently, Trepanier said: "nothing like that is anticipated."

"There's plans the city has" regarding how traffic would move without the viaduct "that are not directly connected with this," he said. But the state transportation department does not "anticipate" any problems.