Under the executive orders, the Defense, Justice and Homeland Security departments would detail a strategy for research and development of gun safety technology over the next 90 days. 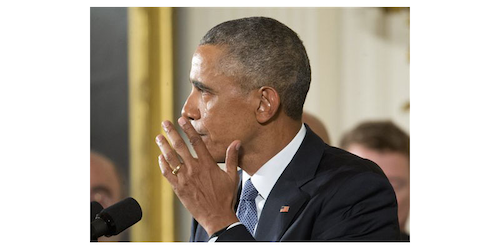 President Barack Obama begins to wipe away a tear as he speaks in the East Room of the White House in Washington, Tuesday, Jan. 5, 2016, about steps his administration is taking to reduce gun violence. Also on stage are stakeholders, and individuals whose lives have been impacted by the gun violence. (AP Photo/Pablo Martinez Monsivais)

President Obama on Tuesday directed federal agencies to study and promote the use of “smart” gun technology as part of a sweeping effort to curb gun violence.

Under the executive orders, the Defense, Justice and Homeland Security departments would detail a strategy for research and development of gun safety technology over the next 90 days.

Those agencies would also regularly review gun safety systems and ways to make them more widely available. The administration noted that the federal government — the country's largest single purchaser of firearms — "has a unique opportunity to advance this research."

"If we can set it up so you can’t unlock your phone unless you’ve got the right fingerprint, why can’t we do the same thing for our guns?" President Obama asked during often emotional remarks on Tuesday.

Critics, however, suggested that the president was making a political maneuver that would not prevent similar attacks in the future.

"Rather than focus on criminals and terrorists, he goes after the most law-abiding of citizens," said House Speaker Paul Ryan, R-Wisconsin. "His words and actions amount to a form of intimidation that undermines liberty."