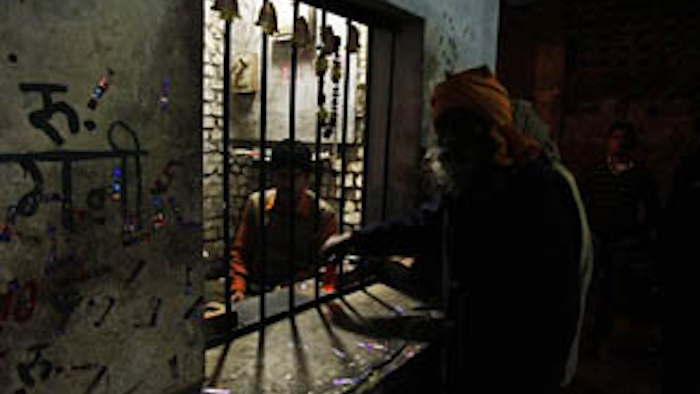 Emergency medical teams rushed to the village outside Kolkata, and thousands of relatives, many of them wailing in grief, gathered outside the packed hospital. Inside, dead bodies lay on the floor covered in quilts, while the ill waited on staircases to be treated. Groups of men sat in the halls with saline drips running into their arms.

Abdul Gayen cried inconsolably for his son, Safiulla, a laborer who drank some of the liquor Monday night and then complained of lightheadedness. When Safiulla woke up the next morning, he fell and began frothing at the mouth, Gayen said. He died before his family could get him to the hospital.

"Safiulla was the lone bread earner in our family. I don't know what will happen to us now," he said.

Illegal liquor operations flourish in the slums of urban India and among the rural poor who can't afford the alcohol at state-sanctioned shops. The hooch, often mixed with cheap chemicals to increase potency and profit, causes illness and death sometimes — and occasionally mass carnage.

Many of the victims — day laborers, street hawkers, rickshaw drivers — had gathered along a road near a railway station after work to drink the illicit booze they bought for 10 rupees (20 cents) a half liter, less than a third the price of legal alcohol, district magistrate Naraya Swarup Nigam said.

They later began vomiting, suffering piercing headaches and frothing at the mouth, he said.

Angry villagers later ransacked booze shops around the village of Sangrampur, about 30 kilometers (20 miles) south of Kolkata, the city formerly known as Calcutta.

Arman Seikh, 23, rushed his brother-in-law to the hospital.

"He complained of burning chest and severe stomach pain last night," he told The Associated Press.

Police officials said the liquor was from an illegal distillery in the village of Mograhat that supplies 70 shops in the area. Police are searching for the kingpin of the operation, who has fled, they said.

Drinking alcohol contains ethanol, whereas highly toxic methanol — a clear liquid that can be used as fuel, solvent or antifreeze — can induce comas and cause blindness and is deadly in high doses.

Anwar Hassan Mullah brought six sickened people to a hospital, and all of them died, he told NDTV news channel. He blamed police for turning a blind eye to bootleggers who spike their alcohol to boost its kick.

"It's a very sad thing that this has happened," Mullah said. "Why don't the police stop this? I cannot understand. What connection do they have (to the bootleggers)?"

By Thursday evening, the death toll had skyrocketed to 143, said Surajit Kar Purkayaspha, a top West Bengal police official. About 100 people were being treated in hospitals, he said.

West Bengal Chief Minister Mamata Banerjee ordered an inquiry into the deaths, called for a meeting of the state's major political parties to address the problem and promised a crackdown.

"I want to take strong action against those manufacturing and selling illegal liquor," she said, according to Press Trust of India. "But this is a social problem also, and this has to be dealt with socially also along with action."

Despite religious and cultural taboos against drinking among Indians, 5 percent — roughly 60 million people — are alcoholics. Two-thirds of the alcohol consumed in the country is illegal homemade hooch or undocumented liquor smuggled in, according to The Lancet medical journal.

The state of Gujarat, where all liquor is banned, just approved a death penalty for making, transporting or selling spurious liquor that kills people. The strict measures were proposed after 157 people died from drinking a bad batch of liquor in the city of Ahmedabad in 2009. At least 180 people died in 2008 around the southern Indian city of Bangalore from a toxic batch of homemade liquor.

The mass casualties came just days after a hospital fire in Kolkata killed more than 90 people and led to the arrest of the facility's directors for culpable homicide.

Illicit liquor is a hugely profitable industry across India, where bootleggers pay no taxes and sell enormous quantities of their product, said Johnson Edayaranmula, executive director of the Indian Alcohol Policy Alliance, an organization that fights alcohol-related problems.

The bootleggers, working in homes, hidden warehouses and even in forests, can turn 1 liter of genuine alcohol into 1,000 liters of bootlegged swill with chemicals and additives that usually cause no harm, but on occasion can lead to tragedy, he said.

Every week, one or two people across the country die from tainted liquor, he said. In 2009, at least 112 people died from a toxic brew in western India.

"People don't know what they are drinking," he said. "It's all easy money, big profits. No one is bothered by the health or social consequences."

The trade is allowed to flourish despite strict laws against spurious liquor because corrupt police, local officials and tax authorities all get a cut of the profits, he said.

"Many people are getting a share out of it, so who is going to take action against these people," he said.