WI Gov: Foxconn Tax Credits Not Off the Table

The company could still quality, said Tony Evers, but only if they renegotiate based on the modified scope of their plan. 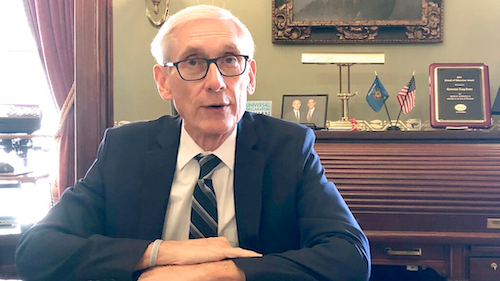 Wisconsin Gov. Tony Evers sits for an interview with The Associated Press Thursday, Dec. 19, 2019, saying that Foxconn Technology Group, the world's largest electronics manufacturer, could still qualify for up to $3 billion in state tax credits in Wisconsin if it makes changes to its deal with the state to reflect current plans for a plant that's under construction. Evers said Thursday. "If we have a deal that is reflective of what they are doing, it's logical that they will get the credits," "But if they don't, that's a whole different deal."
AP photo/Scott Bauer

MADISON, Wis. (AP) — Foxconn Technology Group, the world's largest electronics manufacturer, could still qualify for up to $3 billion in state tax credits in Wisconsin if it makes changes to its deal with the state to reflect current plans for a plant that's under construction, Gov. Tony Evers said Thursday.

"If we have a deal that is reflective of what they are doing, it's logical that they will get the credits," Evers told The Associated Press in an interview. “But if they don't, that's a whole different deal.”

Foxconn signed a contract with Wisconsin under then-Gov. Scott Walker in 2017 to earn nearly $4 billion in state and local tax incentives for a $10 billion display screen manufacturing campus and plant that would employ up to 13,000 people. President Donald Trump heralded the deal as a sign of a revitalized American manufacturing economy, calling the envisioned plant the “eighth wonder of the world.”

But since then, Foxconn announced it was downsizing the factory to what is known as a Generation 6 plant rather than a Generation 10.5 plant. The facility envisioned now would make smaller thin-film transistor liquid crystal display screens for cellphones and other devices, rather than larger screens as first proposed.

Evers and other Democratic critics said because the plant under construction differs from the one envisaged in the original deal, terms of the contract must be updated.

“What they're going to do now is completely different in many ways than what they were planning to do,” Evers said Thursday. “And words mean stuff. And therefore, in order for us to have a document that is reflective of what we're expecting to do, I think we should sit down and talk about it. And I think we will.”

Evers said he was “confident” a new deal could be struck with Foxconn in early 2020, noting that Foxconn earlier this year broached the idea of amending the contract.

Foxconn confirmed in a statement that talks with the state are ongoing but did not detail any changes that may be coming.

Melissa Hughes, secretary of the Wisconsin Economic Development Corporation, said she has met with Foxconn leadership five times since she took control of the state’s economic development agency in October, including on Wednesday.

“In my meeting with Foxconn, I have made it clear that we value the jobs Foxconn is creating, as we know Foxconn values the state’s investment in infrastructure,” she said in a statement. “I look forward to continuing to build a relationship of trust and transparency with our long-term partner that will benefit the company and the taxpayers of Wisconsin.”

Republican Assembly Speaker Robin Vos, whose district includes the Foxconn project, said he's open to making changes to the deal to address what he called “technicalities” to ensure the company qualifies for the tax breaks.

“But we shouldn't say, 'Jeez, because they might make a different screen they're not going to get any help from the state after we made this promise," Vos said. “That's bad faith.”

Evers reiterated, as he's said many times, that he wants the company to be successful.

Some judges have ruled that a lower receiver alone cannot be considered a gun.
Stefanie Dazio
Jake Bleiberg
Jan 14th, 2020

Growers are concerned the government wants to use a heavy hand that could result in many crops failing required tests and being destroyed.
Gillian Flaccus
Jan 13th, 2020

Prosecutors say officials paid millions of dollars in bribes to doctors so they would overprescribe Subsys, a fentanyl-based oral spray.
Jan 12th, 2020

The maker of Crystal Geyser was accused of discharging wastewater with high levels of arsenic.
Associated Press
Jan 9th, 2020

The NHTSA said the automaker was too slow in reporting safety problems and issuing recalls.
Tom Krisher
Dec 19th, 2019