Gov. Gavin Newsom declared an emergency over wildfires burning throughout the state. 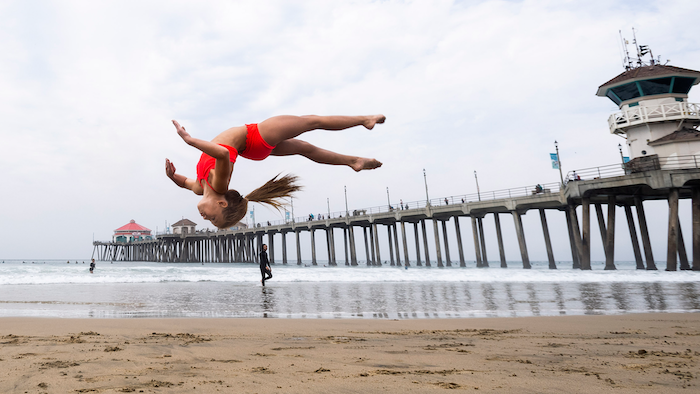 A student works on her skills during an acrobatics class near the pier in Huntington Beach, CA.
Associated Press

The California Independent System Operator had warned earlier in the day that many homes and businesses might be affected unless conservation measures worked but it lifted an emergency declaration shortly before 8 p.m., tweeting: “We did it!"

Conservation measures also helped avoid sweeping outages on Monday but the heat wave blanketing much of the state with triple-digit heat was expected to continue into Wednesday before a few days of slightly cooler weather set in, followed by rising temperatures again for the weekend.

At a cooling center in Sacramento, Newsom applauded industries, businesses and residents for driving down energy usage but warned the state was in a “critical 48-hour period."

"We’re doing everything in our power to understand the root causes of this," said Newsom, who on Monday ordered an investigation into outages that occurred on Friday and Saturday.

The state is in a days-long heatwave that has stressed the electrical system. But the dynamic, humid weather also sparked brief, heavy thunderstorms and flash flood warnings Tuesday afternoon in some desert and mountain areas.

Lightning strikes also set dozens of fires and thousands of people were under evacuation orders not far from the San Francisco Bay Area, near Salinas in Monterey County, around Oroville Dam north of Sacramento, in remote Mendocino County and near the Nevada state line north of Lake Tahoe.

“We are deploying every resource available to keep communities safe as California battles fires across the state during these extreme conditions," he said.

As the sun set orange and red in smoky skies, evacuations were ordered for some parts of Boulder Creek, south of San Francisco, including neighborhoods around Big Basin Redwoods, California’s oldest state park. Some 5,000 people live in Boulder Creek, a community high in the Santa Cruz mountains. The many windy, long, forested roads, some paved, some dirt, can easily become blocked during storms or fires. The orders specify which direction particular neighborhoods need to go to safely get out.

“Our vineyard workers had to evacuate very quickly. And we heard this morning that there was zero containment, so that’s scary. It’s very steep, so I know it’s hard for firefighters to get up there,” said Dawn Phillips, who works in customer service for the winery.

In Southern California, evacuations continued for a week-old fire in the mountains of northern Los Angeles County.

California ISO issued the first rolling blackouts in nearly 20 years on Friday, resulting in the state’s three biggest utilities — Pacific Gas & Electric, Southern California Edison and San Diego Gas & Electric — turning off power to more than 410,000 homes and businesses for about an hour at a time until the emergency declaration ended 3 1/2 hours later.

Former Gov. Jerry Brown called the rolling blackouts “a kerfuffle, not a crisis,” adding that California’s bigger challenge will be reducing its reliance on fossil fuels as climate change continues to warm the planet and energy demands increase.

Associated Press writers John Antczak and Christopher Weber in Los Angeles and Kathleen Ronayne in Sacramento contributed to this report.