Most of that — $176 million — will use sediment dredged from the Mississippi River to build 1,200 acres of marsh. 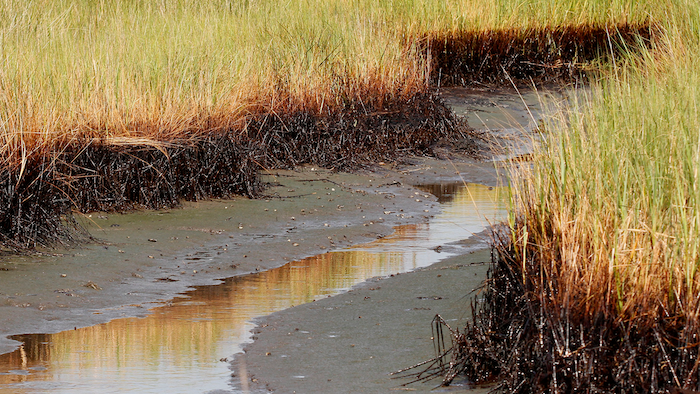 A ribbon of oil lines the bottom stalks of marsh grass.
Associated Press

BATON ROUGE, La. (AP) — Louisiana is getting another $205 million in BP oil spill money to restore its coast.

Most of that — $176 million — will use sediment dredged from the Mississippi River to build 1,200 acres (485 hectares) of marsh in Jefferson Parish.

“This project continues the process of using restoration funding to restore wetlands, coastal, and nearshore habitats in the Barataria Basin, where the greatest oiling impacts from the Deepwater Horizon spill occurred,” a news release stated Wednesday.

More than $25 million will go to oyster projects and $3 million will be spent on improving the system that finds injured or dead dolphins and whales.

The BP well that blew wild in April 2010 killed 11 offshore oil workers and spewed 134 million gallons of oil into the Gulf of Mexico, fouling beaches from Louisiana to Florida, killing thousands of birds, fish and marine animals, leaving lasting harm to creatures as diverse as dolphins and deepwater coral, and devastating the region’s tourist economy.

The marsh creation project is the largest approved so far by a group created to oversee Louisiana projects funded by BP's Clean Water Act penalties, Gov. John Bel Edwards said in a news release. A group with Gulf-wide oversight approved $130 million from such penalties in February to link the state's second-largest coastal swamp back up to the Mississippi River. And $18.7 million rebuilt one of the state's most important pelican rookeries.

The marsh project will expand marsh created below the Jean Lafitte area known as The Pen. Previous projects by the state Coastal Protection and Restoration Agency and federal partners have built more than 1,900 acres (770 hectares) of marsh in that area.

“This funding will enable the construction of one of the largest marsh restoration projects in Louisiana history,” said Bren Haase, CPRA's executive director.

The four oyster projects include $10.1 million to spread limestone for 200-acre (80-hectare) public oyster reefs. Two will be in the Grand Banks area of the Mississippi Sound, Terrebonne Parish’s Sister Lake Public Oyster Seed Reservation. The Louisiana Department of Wildlife and Fisheries also will identify public oyster grounds where conditions favor oysters but there's not enough hard surfaces for the baby oysters called spat to latch onto and grow, and add limestone in such areas.

Another $9.7 million will build two 10-acre (4-hectare) brood reefs in St. Bernard Parish. Such reefs can't be harvested but are near open harvesting areas so it's likely the tiny oysters called spat will drift over and latch onto hard surfaces in those areas.

The Michael C. Voisin Oyster Hatchery, which opened in 2015 in Grand Isle, will get more than $5.8 million to produce oysters, get them onto public reefs that need them, and monitor them.

The hatchery estimates its production is at least 500 million oyster larvae a year. At least one-quarter would help restore protected areas and the rest to public areas that are low-producing or need rehabilitation.

The Marine Mammals Project, a state-federal project led by the National Oceanic and Atmospheric Administration, dedicates $3.1 million to increasing capacity and improving rapid response for injured and dead dolphins and whales, and helping to understand the causes of injury and death. The grant includes money for a Louisiana-based stranding coordinator will build partnerships and conduct outreach to bring in more people, and for equipment, supplies and infrastructure needed for rehabilitation and to help stranded animals.