The utility expects to rely on outages to prevent its outdated grid from starting deadly fires. 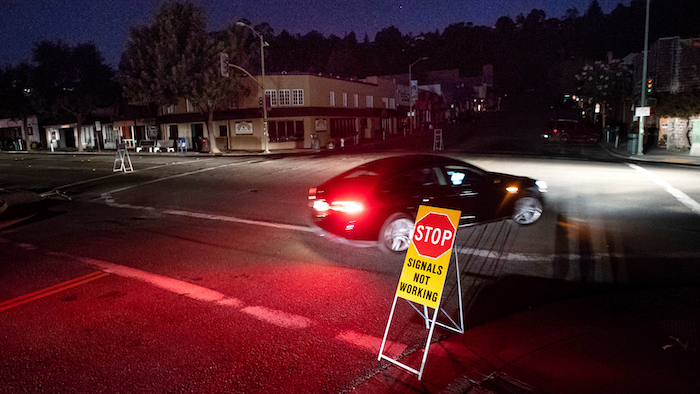 A car drives through a darkened Montclair Village.
Associated Press

SAN RAMON, Calif. (AP) — Pacific Gas and Electric promised regulators Thursday that it has learned from its mishandling of deliberate blackouts and won’t disrupt as many people’s lives during the pandemic this year, when the utility expects to rely on outages to prevent its outdated grid from starting deadly fires.

The contrite pledge came during a virtual hearing before the Public Utilities Commission, PG&E's chief regulator.

The commission is still in the midst of a nine-month investigation into the utility's bungled blackouts that infuriated more than 2 million Northern Californians over several days last autumn.

With wildfire danger even higher this year after an unusually dry winter, PG&E is gearing up to periodically repeat the outages later this summer and into the early fall when dry and windy conditions in Northern California traditionally escalate the danger.

This time around, the potential for blackouts to wreak havoc is higher as millions of people work and attend classes from home during the pandemic. If mishandled, the outages could also endanger the lives of people being supported by medical devices after contracting COVID-19.

Marybel Batjer, the PUC's president, opened the hearing by scolding PG&E and sternly warning that its “haphazard way" of handling blackouts last October and November can't be repeated.

Michael Lewis, interim president of PG&E's utility operations, accepted responsibility for last year's shortcomings, some of which he described as “awful." But he also insisted PG&E is in a much better position to reduce the scope of the blackouts and turn on the power more quickly after investing heavily in upgraded equipment and trimming trees around its power lines.

Those improvements, Lewis said, should reduce the number of customers affected by blackouts by at least one-third from last year and restore power within 12 daylight hours, a 50 percent reduction from its goals last year.

“We are ready to exceed your expectations this year," Lewis told Batjer.

PG&E neglected maintenance of its power lines for so long that its equipment eventually deteriorated to the point that the utility's grid caused a series of wildfires that killed more than 100 people and destroyed thousands of homes during 2017 and 2018. The utility pleaded guilty to 84 felony counts of involuntary manslaughter that destroyed the town of Paradise, California, and it spent nearly 18 months in bankruptcy court negotiating $25.5 billion in settlements to cover the losses from the catastrophes.

Critics now worry PG&E will lean on deliberate blackouts to reduce the chances its equipment starts more wildfires that saddle it with staggering losses. Batjer emphasized that PG&E can only use the outages as “a last resort."

Despite all its recent work on its grid, PG&E expects to be making further improvements for years to come in a process known as “hardening." Earlier this week, the utility said it is on schedule to harden 241 miles (390 kilometres) of distribution circuits this year after hardening 171 miles last year. But that is only a fraction of the 7,100 miles (11,400 kilometres) of distribution circuits that the utility believes needs to be hardened.