Grid operators avoided a third day of rolling blackouts but kept a wary eye on the thermometer. 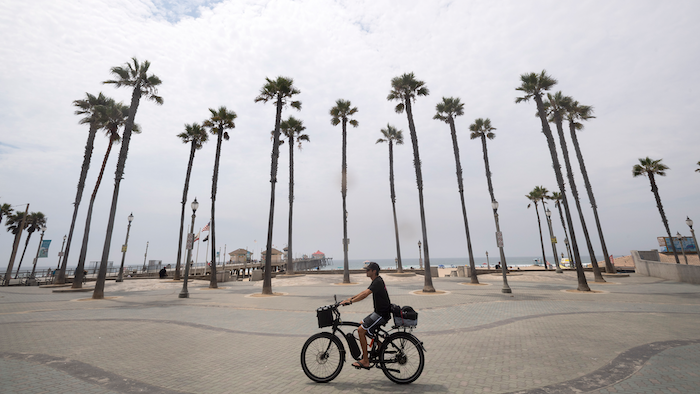 A cyclist rides through the pier plaza in Huntington Beach, Calif.
Associated Press

The California Independent System Operator had warned Monday that as many as 3.3 million homes and businesses would be affected by an evening emergency order that would have required utilities to stage rotating, two-hour outages among customers.

But the order never was issued and the warning was canceled shortly before 8 p.m.

Pleas for people to leave their air conditioners at higher temperatures and avoid using washing machines and other major appliances seemed to have worked.

“Thank you for conserving,” California ISO said in a tweet.

However, grid managers warned that the threat of outages remained as temperatures were expected to hit triple digits again in many areas of the state. The National Weather Service said it may take until Friday or Saturday before excess heat watches and warnings ease.

Michelle Leopold, co-owner of six Ace hardware stores in the San Francisco Bay Area, said she sold 56 wading pools, two air conditioning units and a number of generators Saturday. Fans were flying off the shelves, she said. She’s grateful her employees have not contracted the coronavirus and her stores are even hiring.

“You look at the blessings in this crazy time because there’s not much else to look at,” she said, laughing.

Scorching weather has hit other Western states, making it harder for California to import extra power.

“What we have is a situation where the entire region is more than hot, it’s extremely hot," said Steve Berberich, California ISO's president and CEO. “We can’t get the energy that we would normally get from out of state because it’s being used to serve loads natively. That would probably account for another 4,000 to 5,000 megawatts and could have very well have closed the gap."

California ISO has struggled to reduce the electrical demand since last Friday, when it issued the first rolling blackous in nearly 20 years. The three biggest utilities — Pacific Gas & Electric, Southern California Edison and San Diego Gas & Electric — turned off power to more than 410,000 homes and businesses for about an hour at a time until the emergency declaration ended 3 1/2 hours later.

On Monday, California ISO scrambled to avoid what would have been one of the largest series of blackouts in state history. They would have been far larger than the estimated 1.3 million homes and businesses affected by one outage during a 2001 energy crisis. They also would have far outstripped the nearly 1 million customers impacted last fall when Pacific Gas & Electric cut power over sweeping areas of its territory to avoid sparking wildfires by having power lines fall or get hit with tree branches during hot, dry, windy weather.

“These blackouts, which occurred without prior warning or enough time for preparation, are unacceptable and unbefitting of the nation’s largest and most innovative state,” Newsom wrote. “This cannot stand."

On Monday, the governor said he was ready to “move forward to simply make sure this never happens again."

During a grid operator board meeting Monday, California ISO CEO and President Steve Berberich said the weekend blackouts could have been avoided had regulators listened to its previous concerns about a power shortfall. In call later with reporters, he softened his tone, saying he knows the Public Utilities Commission is working to find the right balance of energy sources.

“It’s substantial, no question about it,” he said of the outage.

The Public Utilities Commission said it would work with the other agencies to figure out what happened. The demand for electricity in the last few days has been consistent with expectations, spokeswoman Terrie Prosper said.

“The question we’re tackling is why certain resources were not available,” she said.

Customers were asked to reduce energy use through Wednesday night, especially during peak evening hours.

Bonnie Wikler, 66, worried about her husband, who is recovering from open heart surgery. She said it was very stressful to lose power twice over the weekend at their home in Coalinga, a city in central California where temperatures reached 109 Fahrenheit (43 Celsius).

They thought about driving somewhere but were too afraid of coronavirus exposure, so they stayed home and cooled off with ice water, she said.

“If there was a fire or an earthquake, I would understand, but to cut power without letting you know, it just seems outlandish to me,” Wikler said.

To some, images of Texas laid bare problems that have long festered.
Feb 22nd, 2021
Follow Us
Most Recent