The Republican-controlled Senate on Thursday approved a bipartisan bill to construct the Keystone XL oil pipeline, defying a presidential veto threat and setting up the first of many battles with the White House over energy and the environment. 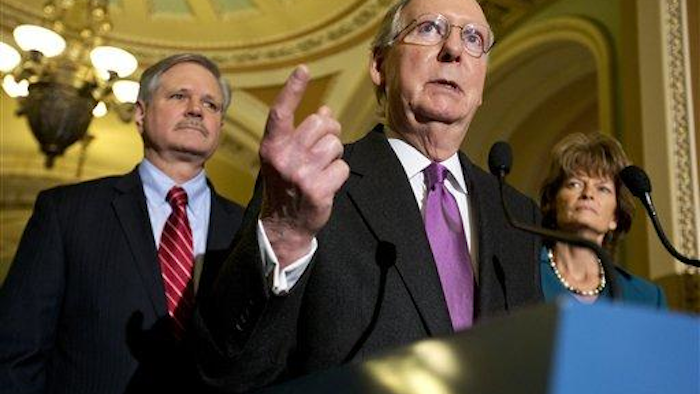 The Republican-controlled Senate on Thursday approved a bipartisan bill to construct the Keystone XL oil pipeline, defying a presidential veto threat and setting up the first of many battles with the White House over energy and the environment.

The 62-36 vote advanced a top priority of the newly empowered GOP, and marked the first time the Senate passed a bill authorizing the pipeline, despite numerous attempts to force President Barack Obama's hand on the issue. Nine Democrats joined with 53 Republicans to back the measure.

Still the vote was short of the threshold needed to override a veto, and the legislation still must be reconciled with the version the House passed.

"We hope President Obama will now drop his threat to veto this common-sense bill that would strengthen our energy security and create thousands and thousands of new, good-paying American jobs," said House Speaker John Boehner.

Democrats framed the bill as gift to a foreign oil company that would have little benefit for the American people, because much of the oil would be exported. They tried and failed to get amendments on the bill to construct the pipeline with U.S. steel, ban exports of the oil and the products refined from it, and protect water resources.

The Senate agreed to add an energy efficiency measure, and went on the record saying climate change was not a hoax and the oil sands should be subject to a tax that helps pay for oil spill cleanups. Oil sands are currently exempt.

"This bill is a disgrace," said Sen. Barbara Boxer, D-Calif., the top Democrat on the Senate environment committee. "We tried on our side to make this a better bill and they turned us away."

"Those who argue this pipeline is for export are not being factual," said Russ Girling, president and chief executive officer of TransCanada. "It's time to approve Keystone XL so we can transport Canadian and American oil to fuel the everyday lives of the American people."

First proposed in 2008, the $8 billion pipeline project has been beset by delays in Nebraska over its route and at the White House, where the president has resisted prior efforts by Congress to force him to make a decision. In 2012, Obama rejected the project after Congress attached a measure to a payroll tax cut extension that gave him a deadline to make a decision. The pipeline's developer, TransCanada Corp., then reapplied.

Obama has said he will not be forced to make a decision on the pipeline, which requires presidential approval because it crosses an international border, until the review process concludes. Federal agencies' comments on whether the project is in the national interest are due Monday.

Environmental groups have called on Obama to reject the project outright, saying it would make it easier to tap a dirty source of energy that would exacerbate global warming. The State Department's analysis, assuming higher oil prices, found that shipping it by pipelines to rail or tankers would be worse for the planet. It also concluded that the project, after construction, would create only 35 permanent jobs, a figure Sen. Chuck Schumer, D-N.Y., compared to a fried chicken franchise.

"The facts are clear: the Keystone XL pipeline will only create 35 permanent jobs while dumping millions of tons of carbon pollution into the air and threatening waterways and communities across the Midwest," said Tom Steyer, the investor and philanthropist who founded the NextGen Climate political action committee.

Supporters say the pipeline is a critical piece of infrastructure that will create thousands of jobs during construction and boost energy security by importing oil from a friendly neighbor.

"We urge the president to make the right decision and approve KXL because it is in this nation's best interest," said Jack Gerard, the president and CEO of the American Petroleum Institute. "The fact is that if all other infrastructure projects are delayed like Keystone XL, we are years away from approving anything that could create jobs and enhance our energy security."