U.S. Sen. Barbara Boxer wants the Justice Department to investigate if California utility executives deceived federal regulators about an equipment swap at the San Onofre nuclear power plant that eventually led to a radiation leak, The Associated Press has learned. 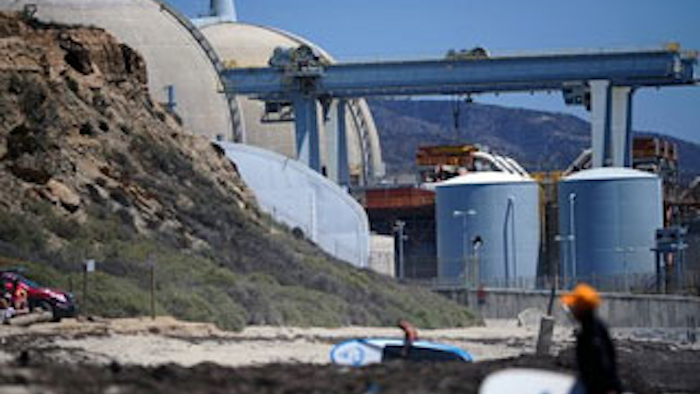 The California Democrat obtained a 2004 internal letter written by a senior Southern California Edison executive that she said "leads me to believe that Edison intentionally misled the public and regulators" to avoid a potentially long and costly review of four replacement steam generators before they went into service.

The twin-domed plant between Los Angeles and San Diego hasn't produced electricity since January 2012, after a small radiation leak led to the discovery of unusually rapid wear inside hundreds of tubes that carry radioactive water in the nearly new generators.

The letter was written to Mitsubishi Heavy Industries, which manufactured the generators that now sit idle in a plant that once produced power for 1.4 million households.

Boxer, who chairs the Senate Environment and Public Works Committee, said in a statement Monday that she is providing the correspondence to the Justice Department and other federal and state officials to determine if Edison "engaged in willful wrongdoing."

An Edison statement said the letter reflected part of the company's effort to ensure flaws were not inadvertently introduced into the generator design. It said Edison took numerous steps to ensure that Mitsubishi addressed the concerns.

"SCE's own oversight ... complied with industry standards and best practices," Dietrich added. "SCE would never, and did not, install steam generators that it believed would impact public safety or impair reliability."

Mitsubishi did not respond to requests for comment Monday.

The letter goes to a central issue at San Onofre, where Edison is seeking federal permission to restart the Unit 2 reactor and run it at reduced power in an effort to halt tube damage.

The replacement generators were different than the originals — they were far heavier and hundreds of additional tubes were added as part of design changes, for example. Edison installed the equipment in a $670 million overhaul in 2009 and 2010 without an extended NRC review after concluding the new machines met a federal test to qualify as largely the same as the ones they replaced, requiring little or no changes to safety systems or components in the plant.

Such equipment swaps, sometimes referred to as "like-for-like" replacements, are common in the industry.

But the Nov. 30, 2004 letter from SCE Vice President Dwight E. Nunn states that "although the old and new steam generators will be similar in many respects they aren't like-for-like replacements."

Boxer's office said the letter, a copy of which was provided to The Associated Press, reveals "evidence of misrepresentation" since it suggests the company knew the replacements didn't meet the "like-for-like" benchmark Edison used to put them in use.

Anti-nuclear activists trying to block the restart have long argued that Edison duped the NRC about extensive design changes to avoid a lengthy, trial-like review, known as a license amendment, that in some cases can take up to two years to complete.

Boxer said the letter shows "Edison knew they were not proceeding with a simple 'like-for-like' replacement as they later claimed."

It's not clear is what, if any, design changes were made after Nunn's 2004 letter.

The Edison statement Monday said the differences between the original and replacement generators "were determined as being insufficient" to trigger a longer license amendment proceeding.

The letter notes the generators will be among the largest ever built for operation in the U.S., and it also provides an eerie warning about the very problems that later sidelined the plant.

Gradual wear is common in steam generator tubing, but the rate of erosion at San Onofre alarmed officials since the equipment is relatively new. Federal investigators last year concluded that a botched computer analysis resulted in design flaws that were largely to blame for the unusual tube wear.

"Success in developing a new and larger steam generator design requires a full understanding of the risks inherent in this process," Nunn said in the letter.

Nunn said designing supports for the tubes would be tricky since larger generators appear more susceptible to tube wear, and added that he was "concerned that there is the potential that design flaws could be inadvertently introduced into the steam generator design that will lead to unacceptable consequences," including tube damage.

"This would be a disastrous outcome for both of us," he said.

Costs for the long-running shutdown have topped $553 million.

As Edison pushes for a restart, the company is facing a thicket of regulatory obstacles that include a separate state investigation into who should pay for the trouble — customers or shareholders. Separately, an NRC licensing board has sided with environmentalists who have called for a license-amendment hearing on the plan to restart the plant, a decision that could be appealed.

The NRC has previously disclosed that its Office of Investigations and Office of the Inspector General are conducting probes into "allegations of willful wrongdoing," but provided no details.

Last month, SCE's parent, Edison International, raised the possibility of retiring the plant if it can't get one reactor running later this year. With questions about whether the plant can restart and who picks up the tab, "there is a practical limit to how much we can absorb of that risk," Edison Chairman Ted Craver told Wall Street analysts.

The four steam generators at San Onofre — two per reactor, each with 9,727 alloy tubes — function something like a car radiator, which controls heat in the vehicle's engine. The generator tubes circulate hot, radioactive water from the reactors, which is used to make steam to turn turbines that produce electricity.

Overall, investigators found wear from friction and vibration in 15,000 places, in varying degrees, in 3,401 tubes inside the four replacement generators.