Nearly 700 residents from Hippo district in Japan's Miyagi prefecture, just northeast of Fukushima, filed a claim Tuesday with a government arbitration office demanding that they be given the same compensation as residents of Fukushima. 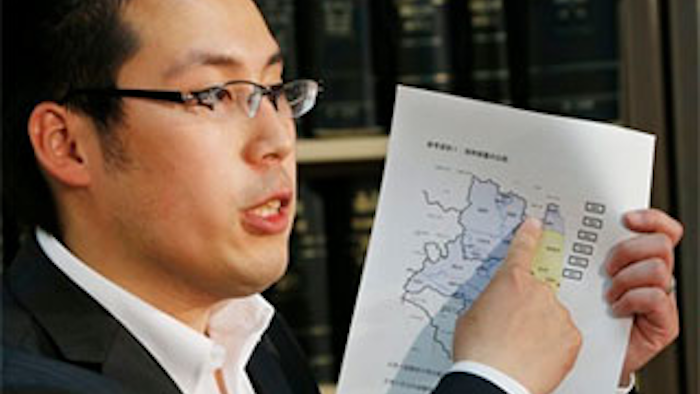 Nearly 700 residents from Hippo district in Miyagi prefecture, just northeast of Fukushima, filed a claim Tuesday with a government arbitration office demanding that they be given the same compensation as residents of Fukushima.

The government's basic compensation scheme only covers Fukushima residents, which critics say is an attempt to minimize costs.

The Hippo residents said some radiation levels in their area exceeded those in Fukushima towns. Hippo district is about 50 kilometers (30 miles) northwest of the crippled Fukushima Dai-ichi nuclear plant.

They demanded that the plant's operator, Tokyo Electric Power Co., pay them an additional 70 million yen ($690,000) in damages.

Due to the huge costs of compensation and cleanup of the plant, TEPCO has declared bankruptcy and is under state control. The compensation money paid by TEPCO actually comes from the government.

Radiation levels in Hippo district are comparable to areas in Fukushima subject to voluntary evacuation, where residents are entitled to receive up to 720,000 yen ($7,000) for every child and pregnant woman, and up to 120,000 yen ($1,180) per adult. After months of negotiations, TEPCO has agreed to pay Hippo residents about half the Fukushima amount.

"We in Marumori town have been exposed to as much radiation as our peers in Fukushima, or even more depending on the area," said Takeo Hikichi, 71, who represents the claimants. "We cannot accept the kind of compensation scheme that discriminates against us just because of the prefectural border."

Residents of areas just outside of Fukushima say they also face discrimination in legal protection. They say health checks, radiation monitoring and cleanup projects in most cases do not go beyond the prefectural border.

"Damages from the nuclear accident do not stop at the border. We hope that the compensation program is carried out in a way that reflects the reality of people's lives," said Koji Otani, a lawyer representing the residents.

Although the amount sought by each resident is small, the group hopes to be able to set a precedent, he said.

A massive earthquake and tsunami hit the Fukushima plant, knocking out its cooling systems and causing the cores of three reactors to melt and release radioactivity into the air and water. The radiation level in Hippo exceeded the annual limit for nuclear workers.

So far, TEPCO has paid 2.3 trillion yen ($22.5 billion), about half of it to companies and business owners. That amount includes 1.6 million individual claims, mostly from voluntary evacuees. Because the amount of claims is expected to exceed the initial estimate of 3 trillion yen ($29 billion), the government has injected an additional 154 billion yen ($1.5 billion) into the compensation fund.

Most of Japan's nuclear reactors have been shut down for tightened safety checks or maintenance since the Fukushima accident. On Wednesday, Japan's nuclear watchdog is to rule on whether one reactor, Tsuruga No. 2, should be permanently closed because of a suspected active seismic fault nearby.

On Tuesday, experts commissioned by the plant's operator asked that the decision be delayed, citing insufficient data. The watchdog's own panel said last week that the reactor most likely sits on an active fault and shouldn't be restarted.