Japan pledged better safety practices for its troubled nuclear industry Tuesday after an accident at a government research facility that exposed 33 people to minor excess radiation and had not been immediately disclosed. Education Minister Hakubun Shimomura said the government will tighten oversight. 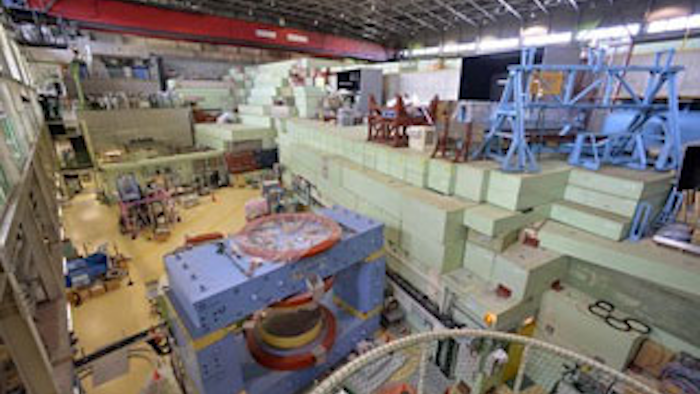 TOKYO (AP) — Japan pledged better safety practices for its troubled nuclear industry Tuesday after an accident at a government research facility that exposed 33 people to minor excess radiation and had not been immediately disclosed.

Education Minister Hakubun Shimomura, whose agency oversees research at the facility in Tokaimura, north of Tokyo, said the government will tighten oversight.

"It is crucial for a nuclear research facility to give top priority to safety measures," Shimomura said. "Their lack of safety awareness and insufficient safety management systems apparently invited the problem."

Japan's nuclear industry has been in crisis since the March 2011 accident at the tsunami-hit Fukushima Dai-ichi nuclear plant, the worst since Chernobyl in 1986. The government has revamped its regulatory regime and is drafting stricter safety standards as troubles mount.

The accident occurred Thursday at the Hadron Experimental Facility of the Japan Atomic Energy Agency's Japan Proton Accelerator Research Complex in Tokaimura, where at least two previous radiation accidents have occurred. Shimomura said the government will set up a panel to discuss reform and safety compliance at the government-run JAEA.

Researchers were trying to generate particles by directing a proton beam at some gold when their equipment overheated, causing the evaporation and release of radioactive gold, the JAEA said. The leak originally was thought to have been contained inside the lab, but it spread to other areas when a ventilation fan was switched on.

Out of 55 people tested, 22 had no excess exposure and 33 received radiation dosages of up to 1.7 millisieverts. That is about as much background radiation as a person in Japanese typically receives over a year. Nuclear workers generally are limited to 100 millisieverts of exposure over five years.

Japan's Nuclear Regulation Authority rated the accident as Level 1, or third from the lowest level on a nine-level international scale. The March 2011 accident at the tsunami-hit Fukushima Dai-ichi nuclear plant, the country's worst ever atomic energy disaster, was rated a 7, the top level on the scale.

Some 150,000 Fukushima residents are still because of that disaster. A zoning reclassification that took effect Tuesday ended a "no-go zone" designation for areas contaminated with radiation from the Fukushima Dai-Ichi plant. However, most of the areas were re-zoned as "difficult to return to" and remain off-limits.

No radiation was released to the outside environment in Tokaimura, but the accident's handling and a failure by the JAEA to report the leak until more than a day later has added to concerns over safety standards and transparency in the industry.

Tokaimura was the site of Japan's second-worst nuclear accident, in September 1999, when two workers were killed by a radiation leak at a fuel-reprocessing plant when they tried to save time by mixing excessive amounts of uranium in buckets instead of using special mechanized tanks. Hundreds of people were exposed to radiation, and thousands evacuated due to that accident, which was assigned a Level 4 rating on the International Nuclear Event Scale.

In March 1997, at least 37 workers were exposed to low doses of radiation in a fire and explosion at a different nuclear reprocessing plant in Tokaimura.

Most of Japan's nuclear plants remain closed after they were shut down for safety checks after the Fukushima disaster, though Prime Minister Shinzo Abe and other top officials have said they intend to restart reactors that meet new guidelines due to be issued in July.

On May 17, the president of the JAEA, Atsuyuki Suzuki, resigned after the country's nuclear watchdog announced that the Monju next-generation test reactor would not be allowed to restart due to safety violations. His resignation was followed by a decision by the watchdog to back expert research concluding that an active seismic fault runs underneath one of two reactors at an atomic plant in Tsuruga, western Japan.