Opposing Nebraska landowners are trying to overturn a state law that allowed the governor to approve its route. 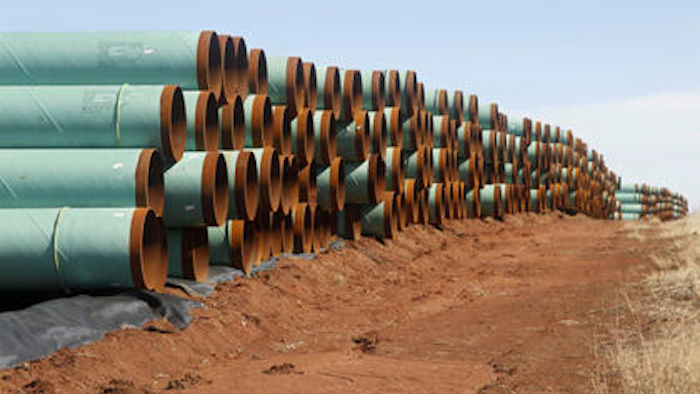 Nebraska landowners who oppose the Keystone XL pipeline are still trying to overturn a state law that allowed the governor to approve the project route, even though pipeline developer TransCanada is no longer relying on it.

Pipeline opponents said Monday they're concerned that companies could use the law in the future to avoid a five-member state commission that regulates pipelines, opting instead for a governor's review and blessing.

Their comments came after a court hearing in O'Neill over a lawsuit filed by landowners, seeking to dismantle the law. A judge could rule on the case as early as next month.

Attorneys for TransCanada are trying to get the lawsuit dismissed after the company announced that it was withdrawing its eminent domain claims against landowners and reapplying to the regulatory Nebraska Public Service Commission.

"Our focus is entirely on moving forward with the (commission) process and building the Keystone XL route in Nebraska in the most timely way possible," TransCanada spokesman Mark Cooper said in an email after the hearing.

Former Gov. Dave Heineman approved a Nebraska route for the Keystone XL in 2013 after a review by the state Department of Environmental Quality.

But the 2012 law that gave him the power to do so has been mired in court, preventing the project from moving forward and contributing to delays from Washington. The pipeline plan also requires presidential as well as state approval because it crosses an international border.

In January, the Nebraska Supreme Court allowed the pipeline-siting law to stand by default. Four judges on the seven-member court ruled in favor of landowners who challenged the law, but a super-majority of five was needed.

The remaining three judges refused to rule on the law, arguing that they couldn't because the plaintiffs in the lawsuit didn't have legal standing. Opponents responded by filing a nearly identical lawsuit, the one heard in court Monday, with landowners who were directly affected. Legal experts have suggested the law is likely to be struck down when it returns to the state's high court.

The pipeline would travel from Canada through Montana and South Dakota to Nebraska, where it would connect with existing pipelines to carry more than 800,000 barrels of crude oil a day to refineries along the Texas Gulf Coast.

Current Gov. Pete Ricketts met with landowners earlier this month, but said afterward that he still supports the pipeline.

"We think there should be only one pipeline (approval) path, or we're going to have the exact mess in the future that we're watching right now," she said. "You can go through one or the other, but you can't choose both."

One affected landowner, Susan Straka of Stuart, said she wants the law invalidated to prevent the kind of drawn-out legal dispute that dogged her family from affecting others.

"Eight years we've been fighting this," she said. "And it's getting really, really old."