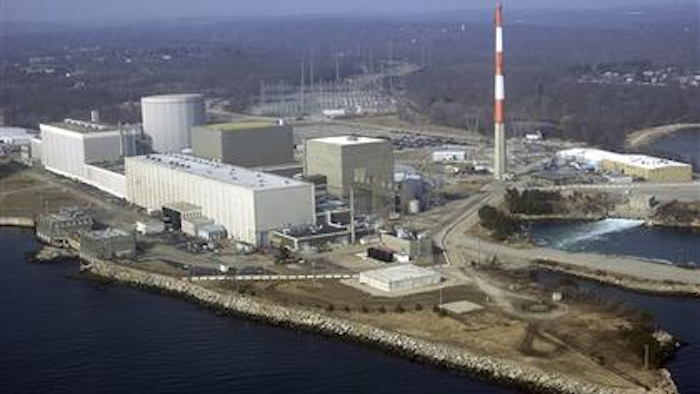 Pilgrim Nuclear Power Station, the only nuclear power plant in Massachusetts, announced last week it will close by June 2019 because it's becoming too expensive to run. Two other nuclear plants operate in New England, at Seabrook Nuclear Power Plant in New Hampshire and Millstone Power Station in Connecticut.

"We're concerned about the apparent enthusiasm around the states for a leap to fill this void with natural gas plants," said Greg Cunningham, of the Conservation Law Foundation, an environmental advocacy group. "It's heading us in the wrong direction."

States have set low-carbon emissions caps in law and will have to find ways to meet those goals after Pilgrim goes dark. Massachusetts Gov. Charlie Baker said the shutdown of Pilgrim will be a "significant loss of carbon-free electricity generation" and will undermine the state's progress in achieving greenhouse gas emission reduction goals.

Matthew Beaton, secretary of the Massachusetts Executive Office of Energy and Environmental Affairs and state Sen. Benjamin B. Downing, D-Pittsfield, Senate chairman of the Joint Committee on Telecommunications, Utilities and Energy, said legislation is being drafted to boost wind, hydroelectric and other sources of power. Baker and lawmakers began work on zero- and low-emission legislation long before the announcement that Pilgrim will close to replace power from retiring plants.

It's the third nuclear plant to close in as many years. Wisconsin's Kewaunee plant was retired in 2013, followed by Vermont Yankee last year, prompting the Nuclear Energy Institute, an industry group, to criticize the pace of competitive electric market reforms.

Regional grid operator ISO-New England warned that Pilgrim's closing will undermine the region's diversity of fuel sources and could make it harder for power plants in the coldest months to deliver power in the quantity and at prices expected by consumers.

Natural gas is still cleaner than oil, which is diminishing in use, and coal-fired plants that cannot easily win permits. Natural gas use has contributed to dramatically reduced carbon emissions in New England to among the lowest in the country, said Dan Dolan, president of the New England Power Generators Association.

One way to reduce carbon levels would be to tighten limits imposed by the Regional Greenhouse Gas Initiative, a regulatory cooperative among northeastern states, he said.

Consumers should not see a jump in prices, Dolan said. An abundance of natural gas and more efficient power plants have helped reduce the wholesale price of energy, though pipeline bottlenecks have pushed up prices in peak times in the winter.

New England faces an aging stock of power generators, with plants accounting for nearly 4,200 megawatts being retired by June 2019, ISO said. Most will be older plants using oil, coal and nuclear. Of 11,000 megawatts of proposed new power sources, two-thirds would use natural gas, and most of the rest would use wind to generate power, the grid operator said.

"While not all the proposed projects will get built, the region will only become more reliant on natural gas for power generation as non-natural-gas-fired power plants retire," ISO said.

New England's dependence on natural gas is soaring. It accounted for 44 percent of the fuel type used for electric energy production last year, up from 15 percent in 2000, according to ISO. Nuclear energy was the next largest source, at 34 percent, an increase from 31 percent. Oil accounted for just 1 percent of electric energy production, plunging from 22 percent in 2000.

Jeffrey Grybowski, chief executive officer of Deepwater Wind, which is building a five-turbine wind farm off Block Island in Rhode Island and planning a 256-square mile wind farm in the Atlantic Ocean, said the region must diversify to avoid an over-reliance on natural gas. He cited wind power, hydropower and transmission lines bringing power in from hundreds of miles away.