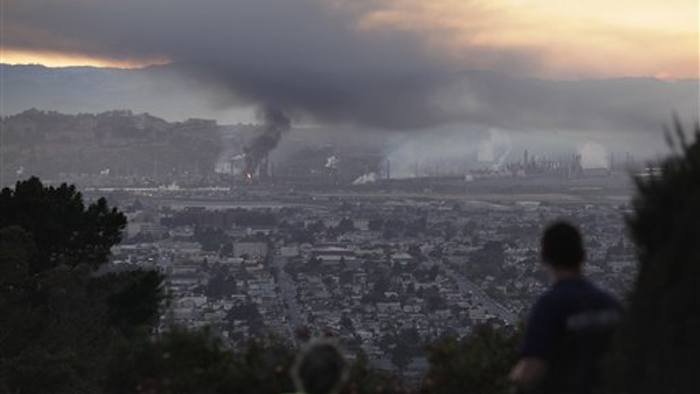 SAN FRANCISCO (AP) — A fire at one of the nation's largest refineries spewed thick black smoke over cities in the San Francisco Bay area, sending scores of residents to hospitals complaining of breathing problems early Tuesday.

Smoke and flames could be seen for miles.

The blaze at Chevron's plant in Richmond, about 10 miles northeast of San Francisco, was contained late Monday although it was not immediately known when the flames would be extinguished, said company spokeswoman Heather Kulp.

A shelter-in-place order for the communities of Richmond, North Richmond and San Pablo was lifted around 11:15 p.m.

Doctors Medical Center in San Pablo, a town near the Chevron refinery in Richmond, said about 200 people had sought help and more patients were arriving. Kaiser's Richmond Medical Center also said several dozen people came to the emergency room complaining of shortness of breath, but none was seriously ill.

Residents said they heard loud blasts around 6:15 p.m., when the fire broke out, although Chevron officials could not confirm those reports.

Daniela Rodriguez told the Contra Costa Times that she heard a "big boom" about the time the fire started. The 23-year-old resident said about an hour passed before she received an automated call from Contra Costa County to remain indoors.

"I was feeling kind of nauseous and light-headed (from the smell)," she told the newspaper.

The refinery produces gasoline, jet fuel, diesel fuel and lubricants, as well as chemicals used to manufacture many other products.

The blaze started at 6:15 p.m. Monday in the refinery's No. 4 Crude Unit and it was contained by 11 p.m., Chevron said in a statement on its website. Spokesman Nigel Hearne said the cause of the fire hasn't been determined and he wouldn't speculate on the cause.

One employee suffered a minor injury.

Randy Sawyer, the chief environmental and hazardous materials officer for the county's health services agency, said any kind of smoke can be toxic, but added: "In this smoke, there can also be all kind of byproducts that can be toxic."

County health officials used automated calls to warn residents of Richmond, San Pablo and the unincorporated community of North Richmond to shelter in place, meaning they should not only stay inside, but should also turn off heaters, air conditioners and fans, and to cover cracks around doors with tape or damp towels.

To the south, Oakland police issued a community advisory suggesting that residents of the North Oakland Hills area close all windows and doors and turn off air conditioners.

A fire at the refinery in January 2007 injured two workers and spewed low levels of sulfur dioxide and other toxins into the air. County officials said then that it was not enough to harm the health of nearby residents.

During an evening news conference, Hearne apologized "to the community for the fire and smoke this evening at the Richmond refinery."

The refinery is the largest producer of base oils on the West Coast, processing up to 240,000 barrels of crude oil a day, according to the company's website.

The company said Monday it did not know yet whether production would be affected. The 2007 fire shut down the refinery for most of that year's first earnings quarter.