Nestled nearly 5,000 feet beneath the earth in the town of Lead, S.D., the LUX lab might be where the elusive stuff called dark matter is finally detected. 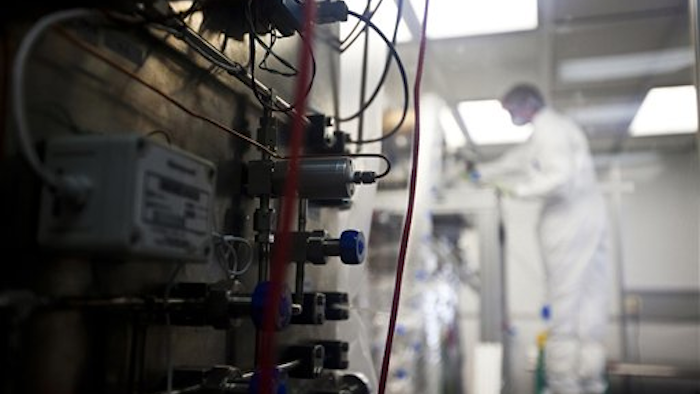 A scientist works Tuesday, May 29, 2012, in an above-ground version of a laboratory to be opened nearly 4,900 feet beneath the earth in Lead, S.D. The lab's experiments will include the world's most sensitive dark-matter detector. Scientists say that the Sanford Underground Research Facility _ housed inside the now-shuttered Homestake Gold Mine _ could help scientists understand the origins of the universe. (AP Photo/Amber Hunt)

LEAD, S.D. (AP) — Nestled nearly 5,000 feet beneath the earth in the gold boom town of Lead, S.D., is a laboratory that could help scientists answer some pretty heavy questions about life, its origins and the universe.

It's hard to spot from the surface. Looking around the rustic town, there are far more nods to its mining past than to its scientific future, but on Wednesday, when part of the closed Homestake Gold Mine officially becomes an underground campus, Lead's name will be known in scientific circles as the place where the elusive stuff called dark matter might finally be detected.

Unimpressed? Consider this: It's sure to earn itself a reference on TV's "The Big Bang Theory."

"This year, 2012, is going to be a very significant year because we get to turn the ... detector on and know very soon whether we have actually found dark matter or not," said Rick Gaitskell, a scientist with Brown University who has worked alongside dozens of scientists over the past few years to move forward with the Large Underground Xenon experiment — or LUX — the world's most sensitive dark-matter detector.

For most people, dark matter is a term that made their eyes glaze over in science class. But for Gaitskell and scientists like him, it's the mystery meat of existence.

"It makes up a huge amount of the universe," said Kevin Lesko, of Lawrence Berkley National Lab, who is the principal investigator for the Sanford Underground Research Facility.

They know it's there by its gravitational pull but, unlike regular matter and antimatter, it's so far undetectable.Scientific papers and books have been dedicated to what it could be, but so far, Gaitskell — who's said he's been "hunting dark matter" for 23 years — and his colleagues know only that it could explain why the universe isn't made up equally of matter and antimatter. That, in turn, could explain how the world as we know it came to be.

"It has to be there because of its effects through gravity, but it also has to have properties that make it very unusual — otherwise, we would have detected it already," Lesko said.

Regular matter — people and planets, for example — make up about 4 percent of the total mass-energy of the universe, he said. Dark matter makes up about 25 percent.

"So it's five times as much as us, and yet we've never directly observed it."

Scientists hope the lab buried 4,850 feet beneath the earth's surface will change that.

On Wednesday, Gov. Dennis Daugaard is to give tours of the underground lab for scientists, dignitaries and media. William Brinkman of the federal Department of Energy confirmed his plans to attend Tuesday, said Bill Harlan, spokesman for the research facility.

The unveiling has been a long time coming: The Homestead mine opened during the Black Hills' gold rush in 1876 and outlasted many counterparts. In the late 1990s, it still employed about 1,000 people, but as the value of gold dropped, it became clear that the mine's days were numbered. It shuttered for good in 2003.

A sign warns visitors not to tap the glass of an above-ground version of the laboratory to be opened nearly 4,900 feet beneath the earth in Lead, S.D. Tuesday, May 29, 2012. (AP Photo/Amber Hunt)

The science community seized on the closure. Dark matter is too sensitive to detect in normal laboratories, but one so far underground would help shield it from pesky cosmic radiation. Also, the LUX detector is submerged in water, further insulating it.

Gaitskell said he's worked with 70 scientists and 14 institutions over the past four years to finally make the LUX experiment a reality.

That detector will be in the Davis Campus, named after Ray Davis, who won a Nobel Prize for Physics for an experiment he started in 1965 inside the then-working mine. Nearby in a new hall called the Transition Area will be the Majorana Demonstrator Experiment. That's aimed to search for a rare form of radioactive decay, which could help physicists understand how the universe evolved.

Experiments are set to begin this year, Harlan said. All told, the site has cost more than $300 million — a mix of private donations and state and federal funding. Among the contributors: a $10 million Housing and Urban Development grant, $40 million from the South Dakota Legislature and $70 million from philanthropist T. Denny Sanford.

About 70 former mine workers now work for the lab. Greg King, a lifelong Lead resident, is one of them.

"The whole town was built up around the Homestake," King said. "As the property closed and people left, a lot of employees left. Now, there's a lot of excitement in town. People are very thrilled that the Homestake is once again, albeit not as a mine."

Liz Tiger, who owns a consignment store on Main Street, said the resurrection of the mine represents hope for Lead, a town of about 3,100 residents about a half-hour from the Wyoming border. Three generations of Tiger's family worked for the mining company.

"The economy up here really died after Homestake shut down," she said. "It was absolutely devastating."

Had it not been for Deadwood, Lead's higher-profile neighbor that draws about 2 million tourists a year, thetown might have gone under, she said.

"I was raised through Homestake. I was very sad when it was shut down. (The mine) definitely needed to be used for something."