A river in Colorado that was turned sickly yellow by a mine waste spill reopened Friday after the now-diluted toxic plume passed through and reached Lake Powell — a huge reservoir 300 miles downstream that feeds the Colorado River and supplies water to the Southwest. 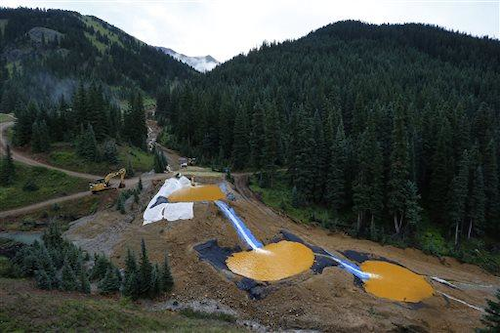 SALT LAKE CITY (AP) — A river in Colorado that was turned sickly yellow by a mine waste spill reopened Friday after the now-diluted toxic plume passed through and reached Lake Powell — a huge reservoir 300 miles downstream that feeds the Colorado River and supplies water to the Southwest.

Water officials, however, said the plume that includes lead, arsenic and other heavy metals now presents little danger to users beyond Lake Powell — such as the city of Las Vegas — because the contaminants will further settle out and be diluted in the reservoir along the Utah-Arizona border.

"We're kind of at the end of the road," said Erica Gaddis, assistant director of the Utah Division of Water Quality.

The initial spill involved more than 3 million gallons of waste from the Gold King Mine into the Animus River, but that amount is dwarfed by the 10 trillion gallons of water in the Colorado River system, said Corey Enus, a spokesman for the Southern Nevada Waste Authority.

His agency estimates the wastewater will make it out of Lake Powell in about two weeks amid extra testing to monitor the contaminants.

The picturesque reservoir is a hotspot popular among tourists for fishing and other recreation.

Utah's state fish biologist Richard Hepworth said he's not expecting fish to die off, but there could be long-term effects on species such as striped bass.

"My concern is, can people still eat these fish?" he said.

But some native fish, like the razorback sucker, are re-populating, and there are fears the recovery could be in danger because of the contaminants.

"If I smoke every day of my life, I may only live to 50 or 60 vs. 70 years," he said. "Even low concentrations when experienced over many days and weeks and years could have an effect."

U.S. Rep. Rob Bishop, R-Utah, said the spill poses a serious threat to the environment and the economy. Bishop, who chairs the House Committee on Natural Resources, plans to visit Lake Powell on Monday.

Meanwhile, some businesses in the river-based economy near the spill site in Colorado might not recover this year, even with the re-opening of the Animas River to rafting and kayaking on Friday, said Tom O'Keeffe, owner of Durango Rafting Co.

"Your average soccer mom is going to be scared off," he said, adding that nervous rafters will probably just pick another river.

"My phone stopped ringing four or five days ago," he said.

In New Mexico, officials lifted a precautionary ban on water from private wells throughout the Animas River valley but kept in place warnings not to drink water from the river or give it to livestock.

"As the river begins to clear up, there are still many questions left unanswered by the EPA," she said. "New Mexicans deserve to know the long-term effects this environmental catastrophe will have on our communities, our agriculture and our wildlife."

On the Navajo Nation, tribal officials continued to warn residents and farmers not to use water from the San Juan River, which was also polluted as a result of the spill.

The tribe has set up fresh water stations for residents and water was being delivered for farmers and livestock.