It will take many years and many millions of dollars simply to manage and not even remove the toxic wastewater from an abandoned mine that unleashed a 100-mile-long torrent of heavy metals into Western rivers and has likely reached Lake Powell, experts said Thursday. 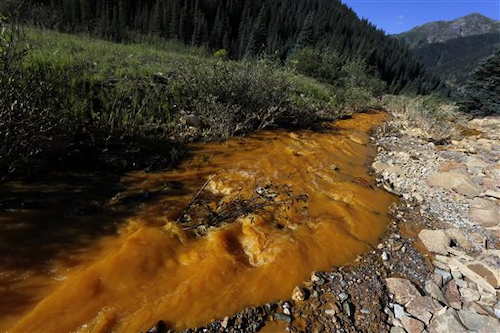 SILVERTON, Colorado (AP) — It will take many years and many millions of dollars simply to manage and not even remove the toxic wastewater from an abandoned mine that unleashed a 100-mile-long torrent of heavy metals into Western rivers and has likely reached Lake Powell, experts said Thursday.

Plugging Colorado's Gold King Mine could simply lead to an eventual explosion of poisonous water elsewhere, so the safest solution, they say, would be to install a treatment plant that would indefinitely clean the water from Gold King and three other nearby mines. It would cost millions of dollars, and do nothing to contain the thousands of other toxic streams that are a permanent legacy of mining across the nation.

Federal authorities first suggested a treatment plant for Gold King more than a decade ago, but local officials and owners of a nearby mine were reluctant to embrace a federally-sponsored cleanup.

"They have been not pursuing the obvious solution," said Rob Robinson, a retired abandoned mines cleanup coordinator for the U.S. Bureau of Land Management. "My hope is this has embarrassed the hell out of them and they're going to finally take it seriously."

The Gold King delay illustrates a problem dwarfing the 3 million-gallon waste plume accidentally released by contractors working for the U.S. Environmental Protection Agency: There are about 500,000 abandoned mines nationwide, and only a fraction have been dealt with, despite decades of effort.

EPA has estimated the cost of cleaning up abandoned mines nationwide, not including coal mines, at between $20 billion and $54 billion.

Many of the abandoned mines — including in the Silverton area where Gold King is located — were developed after an 1872 federal mining law encouraged development and allowed people to lay claim to minerals beneath public lands.

They've since become legacies of the industry's boom-bust cycles, in which companies fold up operations when metals prices fall, leaving behind sources of toxic wastewater that chronically leave rivers barren and taint drinking water supplies.

Of the abandoned mines in the U.S., more than 48,000 had been inventoried through the BLM's Abandoned Mine Lands program, which began after new federal laws focused on environmental protection in the 1960s, 1970s and early 1980s.

But only about one in five of the inventoried mines is being cleaned up or requires no more action. More than 38,000 await further analysis or work, according to the bureau.

Under the federal Clean Water Act, the mine owner is supposed to control discharges, but Gold King's landowner, Todd Hennis, is not considered legally responsible for the cleanup because the mine stopped operating in 1923, long before the modern era of environmental protection.

"A lot of these are Mom and Pops, they've inherited the property or they bought it years ago before the environmental laws were passed, and they just don't have the resources," said Doug Jamison, with the hazardous materials division at Colorado's state health department.

In Colorado alone, there are hundreds, possibly thousands of abandoned mines discharging acid rock drainage, Jamison said. The potent stew of heavy metals accumulates as chemical reactions brew up sulfuric acid at concentrations high enough to dissolve steel, and leach poisons down mountainsides and into groundwater decades after mines close.

The EPA announced Thursday that surface-water testing in Colorado revealed very high levels of lead, arsenic, cadmium and other heavy metals in the middle of the sickly yellow plume released on Aug. 5. These metals far exceeded government exposure limits for aquatic life and humans in the hours after the spill.

The EPA said its analysis shows the heavy metals quickly returned to "pre-event levels" once the plume passed through the area it tested, on the Animas River between Silverton and the municipal water intake for Durango, a downstream city of 16,000.

Utah officials said Thursday that the plume had likely reached Lake Powell, although it has been diluted on the 300-mile journey to the reservoir and lost the bright yellow color seen closer to the site. Authorities could not immediately confirm the presence of heavy metals and other contaminants close to the lake and said tests on Utah river water suggest the spill has dissipated enough that the water is safe to drink and officials aren't expecting to see fish dying off at the lake.

The state continued to warn people not to use it for irrigation or livestock water, however, Utah Department of Environmental Quality spokeswoman Donna Spangler.

EPA Administrator Gina McCarthy, who took full responsibility and promised that the agency will pay for any damage, said Thursday that these results show the river is "restoring itself." She also announced that the EPA has released $500,000 to help supply clean water for crop irrigation and livestock in northwestern New Mexico.

Absent technological breakthroughs, the EPA expects to be treating water at abandoned mines for generations.

California's 150-year-old Iron Mountain mine discharged six tons of toxic sludge a day before a clean-up by the EPA, which declared it a Superfund site in 1983, 20 years after it shut down. The sludge caused massive fish kills in the Sacramento River system, which supplies a fifth of the state's water, more than 30 times. Authorities now spend $5 million a year to remove poisons, and expects to keep at it forever.

At Montana's Berkeley Pit, meanwhile, an acid lake created when Atlantic Richfield Co. turned off the pumps at its copper mine in 1982 grows by millions of gallons every day. The EPA made it a Superfund site, too, planning to keep acid spills from Butte Valley waterways. Meanwhile, the notorious pit grows in infamy: In 1995, an entire flock of migrating snow geese perished after setting down in the water.

While active mines are regulated under existing law, inactive mines like Gold King are not, and viable parties are rarely available to conduct cleanup or provide the necessary resources. Non-profit groups and other so-called Good Samaritans that might try such work on their own are hobbled by federal laws that render them liable for whatever pollution comes out.

Costs also are a major hurdle: Robinson, the former BLM official, said a treatment plant capable of cleaning up the stream of toxins spewing from Gold King and other nearby mines into the Animas River basin would take up to $5 million to build, and much more to operate.

"We're now 25 years down the road of trying to get the Animas cleaned up," he said. "It's time to stop dinking around with the problem and get on with it."

The EPA tested for 24 metals in the spill; One of the most dangerous, lead, was found below Silverton's 14th Street bridge at more than 200 times higher than the acute exposure limit for aquatic life, and 3,580 times higher than federal standards for human drinking water. Levels of arsenic were more than 24 times the exposure limit for fish and 823 times the level for human ingestion. Cadmium was found at more than six times the aquatic limit, 33 times that for humans.

The plume has since dissipated, its heavy metals settling into riverbeds, during the waste's 300-mile journey toward Lake Powell, where the flow joins the Colorado River that supplies water to the Southwest. McCarthy promised a long-term plan to address riverbed contamination, but offered no specifics. The EPA also promised free water testing for homeowners with wells close to the river, but it's unclear how long that offer stands.