Air Pollution Killing 4,000 in China a Day, US Study Finds

Air pollution is killing about 4,000 people in China a day, accounting for 1 in 6 premature deaths in the world's most populous country, a new study finds. 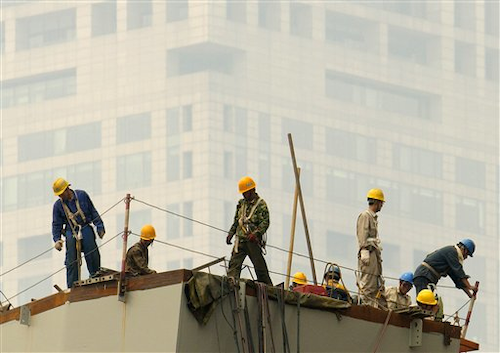 WASHINGTON (AP) — Air pollution is killing about 4,000 people in China a day, accounting for 1 in 6 premature deaths in the world's most populous country, a new study finds.

Physicists at the University of California, Berkeley, calculated that about 1.6 million people in China die each year from heart, lung and stroke problems because of incredibly polluted air, especially small particles of haze. Earlier studies put the annual Chinese air pollution death toll at 1 to 2 million, but this is the first to use newly released Chinese air monitoring figures.

The study released Thursday blamed emissions from the burning of coal, both for electricity and heating homes. The study, to be published in the journal PLOS One, uses real air measurements and then computer model calculations that estimate heart, lung and stroke deaths for different types of pollutants.

Study lead author Robert Rohde said that 38 percent of the Chinese population lives in an area with a long-term air quality average that the U.S. Environmental Protection Agency calls "unhealthy."

"It's a very big number," Rohde said Thursday. "It's a little hard to wrap your mind around the numbers. Some of the worst in China is to the southwest of Beijing."

"In other words, nearly everyone in China experiences air that is worse for particulates than the worst air in the U.S.," Rohde said.

Unlike the U.S., air pollution in China is worst in the winter because of burning of coal to heat homes and weather conditions that keeps dirty air closer to the ground, Rohde said. Beijing will host the 2022 Winter Olympics.

Outside scientists praised the research. Jason West at the University of North Carolina said he expects "it will be widely influential."

Allen Robinson at Carnegie Mellon University said in an email that parts of the United States, like Pittsburgh, used to have almost as bad air but have become much cleaner "through tough regulations combined with large collapse of heavy industry (it moved to Asia)."

As China starts to clean up its air, limiting coal use, it will also reduce emissions of carbon dioxide, the chief global warming gas, Rohde said.