A Texas company that's building an oil pipeline across four states was told Wednesday by the Iowa Utilities Board to stay away from the properties of 15 Iowa landowners. 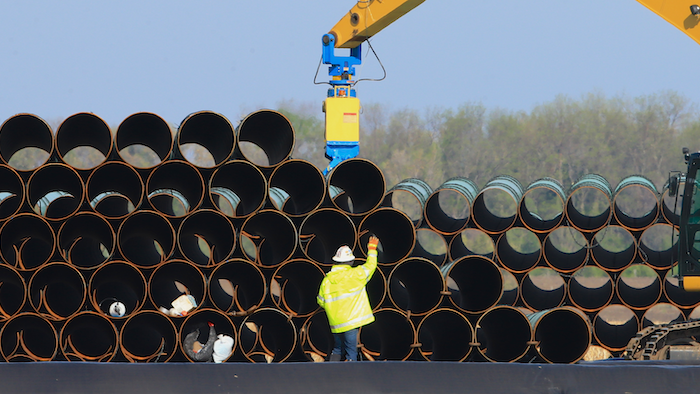 BISMARCK, N.D. (AP) — A Texas company that's building an oil pipeline across four states was told Wednesday by the Iowa Utilities Board to stay away from the properties of 15 Iowa landowners until Monday to give board time to review legal issues involving a lawsuit.

Also Wednesday, a federal judge in Washington, D.C., will consider a request by the Standing Rock Sioux Tribe to temporarily stop construction of the pipeline near their reservation, which straddles the North Dakota-South Dakota border.

The $3.8 billion pipeline, which will run 1,168 miles through Iowa, Illinois, North Dakota and South Dakota, has generated legal challenges and protests, most aggressively in North Dakota and Iowa. Growing protests and increased tension over the pipeline that will cross the Missouri River near the Standing Rock Sioux reservation has led to 28 arrests.

"Everyone needs water and I'm very grateful to the Standing Rock Tribe for making this clear that this has to stop," Sarandon told The Associated Press. "Now it's our turn to support them and make things right."

The Iowa board told Dakota Access that it must to provide detailed information about the construction progress in Iowa, as well as more information about costs the company will incur if it's required to work around the landowner's parcels. Dakota Access previously estimated the cost to move construction crews and equipment around the 15 parcels at more than $500,000 for each.

A company spokeswoman did not immediately respond to a message.

The Iowa Utilities Board will hear arguments Thursday on the landowners' motion to halt construction on their properties until a court can rule on their lawsuit, which challenges the board's authority to allow forced condemnation of farmland for a privately owned pipeline project under eminent domain laws.

Earlier this month in Iowa, construction equipment at several construction sites was set on fire, causing more than $1 million in damage. Protest groups in the state denied responsibility, but said they plan to continue peaceful demonstrations against the project.