As tech giants like Google and Apple look to automobiles as the next frontier for innovation, they face a looming reality: Cars are a lot harder to manufacture and sell than smartphones. 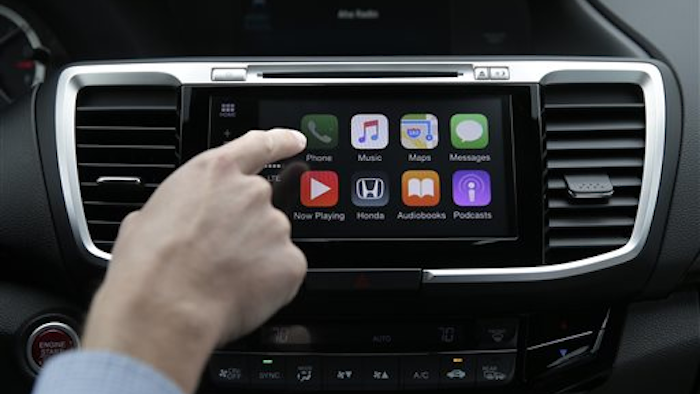 NEW YORK (AP) — Silicon Valley may think it can build a better car. But should it?

As tech giants like Google and Apple look to automobiles as the next frontier for innovation, they face a looming reality: Cars are a lot harder to manufacture and sell than smartphones.

Industry veterans and critics warn that the auto business is a different animal. It's fraught with massive costs to erect auto plants, complexities in developing new sales and service systems, and daunting liabilities involved when human lives are at stake.

General Motors Co. has had to pay $5.3 billion to cover fines, victim compensation and the recall of millions of vehicles for faulty ignition switches. Toyota Motor Corp. paid a $1.2 billion fine for failing to report safety defects, and Volkswagen Group has set aside $7.3 billion for the potential costs of its emissions scandal.

"I think, like so many Silicon Valley techies, that they believe they are smarter than the world's automobile business, and that they will do it better," said Bob Lutz, a retired General Motors vice chairman. "No way."

He added that tech companies would pay the same high prices for expensive components such as electric car batteries, likely pushing retail prices of their vehicles out of reach for the average driver.

"It will be a huge money loser," Lutz predicted.

To be sure, Google and Apple have plenty of cash to burn, with about $270 billion in the bank combined. But the challenges of the car industry may be steering them to find ways to revolutionize automotive technology without becoming actual automakers.

Mountain View, California-based Alphabet, the new holding company for Google and its affiliated businesses, has spent six years working on cars that can drive without human assistance. But the company says it doesn't want the responsibility of building the robotic vehicles.

Instead, it plans to make the self-driving system available to automakers that already have factories, dealerships and experience.

"We have enormous respect for the expertise of the automotive industry and how big and complex a job it is to manufacture a vehicle," company spokeswoman Courtney Hohne said. "We'll partner with many different companies to bring this technology into the world safely."

The strategy is consistent with how Google currently operates. It relies on other companies to produce the devices powered by its software. Most smartphones, for example, operate on its Android software. But the company doesn't make any of the devices.

If its self-driving system makes it to market, the company could license the software for a fee or, perhaps, making it free to use like Android.

That's because it makes most of its money from ads within their popular online services. If they no longer need to drive, people might spend time in their cars watching videos on Google-owned YouTube or seeking information on Google's search engine — both of which show ads.

But licensing their technology won't insulate it from safety issues. The company potentially could be held liable if one of its self-driving cars goes awry and injures or kills people in an accident.

Apple CEO Tim Cook told an audience this week that the automotive industry is ripe for "massive change," with new software, electric motors and self-driving capability becoming "much more important, in a huge way."

But Cook avoided commenting on reports that Apple may be building its own car, according to a video recording of his remarks Monday at a technology conference sponsored by The Wall Street Journal.

"What we really want, hopefully in the short term, is we'd like people as they enter their car to be able to have an iPhone experience in their car," he said.

Apple has developed software for automakers called CarPlay, which lets drivers use an iPhone and its voice-activated assistant Siri to operate some electronic controls and entertainment systems.

In a research note, UBS analyst Steven Milunovich cites the $2 trillion auto industry as a potential new opportunity at a time when sales of smartphones, tablets and PCs are seeing slower growth globally.

Milunovich noted, however, that cars have significantly lower profit margins than iPhones.

Apple outsources manufacturing to contractors in Asia. That may be more difficult to do with cars, said Jack Nerad, an analyst at Kelley Blue Book's KBB.com.

While an iPhone is complex, with about 1,700 components in an iPhone 6 Plus, it pales in comparison to a vehicle, which has some 10,000 parts.

Sergio Marchionne, CEO of Fiat Chrysler Automobiles, sees a car in Apple's future, though he doubts they'll attempt to manufacture it themselves. He welcomes the competition.

"I think that this industry in general needs to open up to disrupters," Marchionne said in an interview on CNBC Wednesday. "Whether it's the Google car or the Apple car... it's going to change the traditional nature of car-making."

Self-driving technology has also piqued the interest of Uber, the fast-growing Silicon Valley startup that operates a ride-hailing service in cities around the world. Uber said earlier this year that it was partnering with Carnegie Mellon University to research and develop new technologies for mapping, vehicle safety and autonomous driving.

The company hasn't said whether it hopes to use autonomous technology to replace its thousands of drivers, who work as contractors driving their own cars.

But CEO Travis Kalanick has suggested Uber could someday expand with the help of self-driving vehicles, and touted the technology's promise for improving safety and easing traffic congestion.

Electric car maker Tesla Motors, also based in Silicon Valley, serves as both role model and cautionary tale for companies thinking of getting into the car business.

Tesla is admired for its elegant, emissions-free vehicles packed with technology. It does no advertising but has built a global fan base.

It also illustrates the challenges of the industry.

Tesla has also felt the pain of safety issues. In 2013, it faced questions after several Model S sedans caught fire after road debris damaged their batteries. Tesla wound up strengthening the battery shield on new and existing cars.

"For Apple, the car is the next logical thing to finally offer a significant innovation," he told German newspaper Handelsblatt in an interview earlier this month.