People whose cars have been recalled to fix airbag inflators made by Takata Corp. should get the repairs done as soon as possible or face the risk of death or injury, U.S. safety regulators said Thursday. 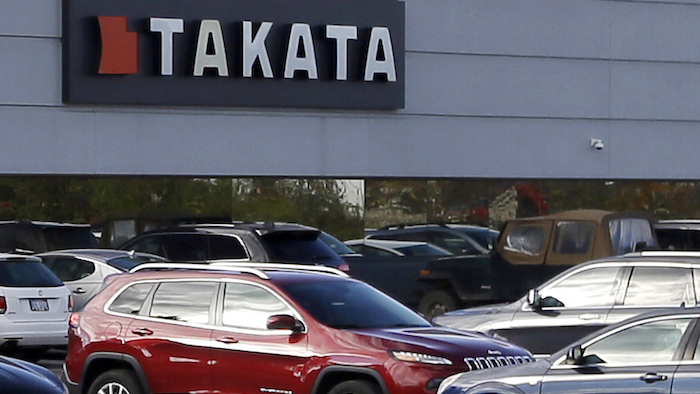 WASHINGTON (AP) — People whose cars have been recalled to fix airbag inflators made by Takata Corp. should get the repairs done as soon as possible or face the risk of death or injury, U.S. safety regulators said Thursday.

Speaking at a public meeting on Thursday, officials of the National Highway Traffic Safety Administration said eight people have died and 98 more have been hurt by inflators that can explode with too much force, spewing shrapnel into drivers and passengers.

About 23.4 million Takata driver and passenger airbag inflators have been recalled on 19.2 million U.S. vehicles sold by 12 auto and truck makers. As of Oct. 9, only 22.5 percent of the recalled inflators had been replaced nationwide. The figure was 4.4 percent on Sept. 1.

Officials said it's difficult to estimate how long it will take to fix all of the cars because of the size and complexity of the recall. NHTSA is considering taking over management of the recalls in order to speed up the pace of repairs.

The progress is "simply not good enough to address the risk these vehicles pose to the driving public," said Jennifer Timian, head of NHTSA's recall management division.

Officials showed a slow-motion video of a violent explosion of a metal inflator during a test. They said people have suffered cuts to the neck, loss of eyesight and hearing, and broken teeth. The agency knows of 89 driver's side and 32 passenger inflator ruptures. All eight known deaths involved driver's side airbags.

Among the options NHTSA is looking at to speed up the recalls is allowing outside repair shops to do the recall work. Currently only auto company dealers are allowed to make the repairs. The agency also will consider hiring a person to oversee the recalls and deal directly with the auto manufacturers.

Agency officials also cautioned that the recalls, which date to 2004, could expand beyond driver and passenger front airbags. Volkswagen and General Motors recently recalled Takata inflators in seat-mounted side airbags because of a chance they could rupture.

The agency said it will focus on getting replacement inflators to older cars, and those in high-humidity areas mainly along the U.S. Gulf Coast. Takata uses the chemical ammonium nitrate to create an explosion that inflates airbags, but it can deteriorate over time, especially when exposed to moist air. Automakers have been targeting a limited number of inflators first to high-humidity areas, where nearly 30 percent of the cars have been fixed.

Officials conceded that they still don't know the exact cause of the problem — which means even some replacement inflators may have to be recalled. But Rosekind said it's better to get repairs made as quickly as possible.