US Treasury Chief Says Trade Deal Possible With UK in 2020

With Britain leaving the EU on Jan. 31, replacing trade ties with other post-Brexit pacts is considered critical for the nation's economy and future. 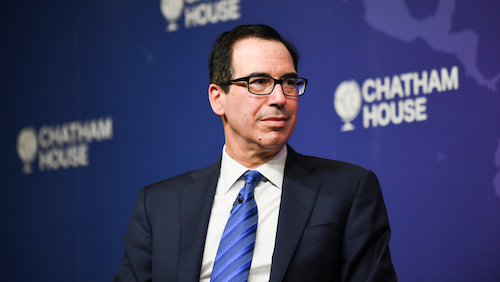 LONDON (AP) — U.S. Treasury Secretary Steven Mnuchin suggested Saturday that Britain and America would be able to conclude a trade deal this year, despite lingering disagreements on a digital services tax and whether to allow Chinese tech giant Huawei to build aspects of a new high-speed mobile network.

Britain leaves European Union on Jan. 31, severing decades of friction-less trade with a market of 650 million. Replacing those trade ties with other post-Brexit pacts is considered critical for the nation's economy and future.

“I think the timing is important,'' Mnuchin told an audience at the Chatham House think tank. “You know, we're focused on trying to get this done this year because we think it's important to both of us.”

Mnuchin stopped in the U.K. following the four-day World Economic Forum summit in Davos, Switzerland. He held talks with UK Treasury chief Sajid Javid in both Davos and again in London on Saturday.

However, he declined to offer any details on what he described as the “ongoing'' discussions with the British government on Huawei.

The United States is pushing Britain and other allies to ban Huawei from making parts of its 5G network, claiming it would be a security risk — something Huawei vehemently denies.

Huawei is the world’s biggest maker of switching gear for phone and internet companies. But it has faced rising scrutiny over U.S. allegations that it could be forced by the Chinese government to provide access to consumer data on its networks.

“We want to make sure our infrastructures are protected,'' Mnuchin said. "And I think on a broader basis ... as more and more things are connected to the network and to the grid, these national security issues go beyond the traditional aspects and go into various different aspects.''

British Prime Minister Boris Johnson and U.S. President Donald Trump discussed cooperation to ensure the security of telecommunications networks during a call on Friday. Britain's National Security Council is widely expected to make its decision on Huawei next week.

On another big tech issue, Mnuchin decried what he saw as a “disproportionate amount of interest" in a tax on big tech players. Britain has said it will go ahead with the tax later this year.

“The U.S. feels very strongly that any tax that is designed specifically on digital companies is a discriminatory tax and is not appropriate and has violations to our tax treaties and other issues,” he said.

The tax is meant to prevent tax avoidance measures by multinationals. Britain wants an international agreement on the way global taxes work and has said it will back off on the digital tax once such a plan is in place.

The Americans say the tax unfairly singles out companies like Amazon and Google. Britain's position stands in contrast to that of France, which earlier this week delayed its tax on big tech in exchange for the United States' promise to hold off on retaliatory tariffs.

Under Armour May Need to Restructure

The company says it may also scuttle its flagship store in NYC.
Associated Press
Feb 11th, 2020

Mainstream economists argue that changes in trade policy are not responsible for the decline.
Paul Wiseman
Feb 6th, 2020

Here are some questions and answers about the new deal.
Paul Wiseman
Jan 29th, 2020

Trump made renegotiating the North American Free Trade Agreement a priority during his 2016 campaign, although trade experts say the impact of the new deal will be modest.
Kevin Freking
Paul Wiseman
Jan 29th, 2020

Emmanuel Macron is insisting that his reforms are attracting investors despite six weeks of crippling protests and walkouts over his plan to overhaul the retirement system.
Sylvie Corbet
Jan 21st, 2020