Canadian Pacific offered more details and defended its offer to join two of North America's biggest railroads, but Norfolk Southern offered only a lukewarm response and regulators have expressed significant concerns about any rail mergers. 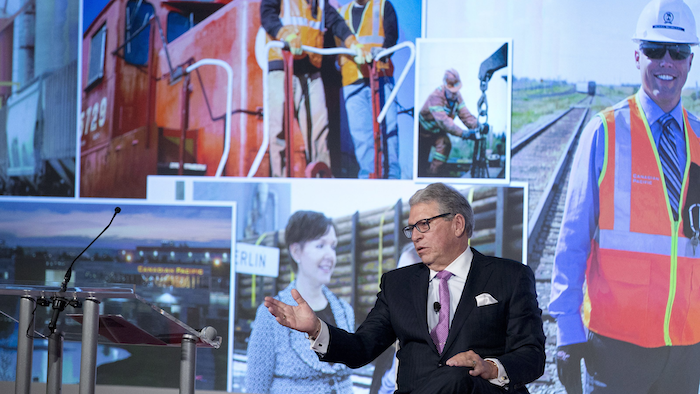 Canadian Pacific offered more details and defended its offer to join two of North America's biggest railroads, but Norfolk Southern offered only a lukewarm response and regulators have expressed significant concerns about any rail mergers.

Norfolk Southern said the offer of $46.72 cash and 0.348 shares in the combined company represented a premium of less than 10 percent of its stock price on Tuesday. Canadian Pacific said that the offer could deliver nearly 60 percent premium, but it based its calculation on an estimate of what the combined railroads might be worth next March.

It's clear the two railroads haven't agreed on the value of their operations or the likelihood that such a merger would be approved. Canadian Pacific spokesman Martin Cej said his company has only made an offer to talk with Norfolk Southern about a deal, not a formal bid.

"This is not a quick-and-dirty takeover," Cej said. "It is one that assumes the shareholders of Norfolk Southern would want to take part in the combined growth of the company in the future."

This offer comes a year after Canadian Pacific discussed a possible merger with Norfolk Southern's main competitor in the Eastern United States, CSX railroad. Those talks ended abruptly after a failure to agree on a number of issues.

Railroads are under pressure due to flagging demand for coal with exports weak and U.S. utilities switching to natural gas. Norfolk Southern's coal revenue dropped 23 percent to $482 million during the third quarter. The company has taken roughly 300 miles of track primarily used for coal out of service over the past 18 months in response to the lower volume.

Citi analyst Christian Wetherbee said if Canadian Pacific is willing to increase its offer a bit, it might be able to persuade Norfolk Southern shareholders to support a merger.

"While NS's response was cool, we believe this offer to be a starting point as opposed to an ending point," Wetherbee said. Norfolk Southern will face pressure to explain the advantages of going it alone.

Shares of the Norfolk, Virginia, company closed at $86.97 on Tuesday and have climbed nearly 9 percent since media reports of a possible deal surfaced earlier this month. The stock jumped more than 6 percent Wednesday.

Canadian Pacific estimates that by the time a formal offer is announced in late March, the total value of the cash-stock deal will be $126.18, based on the future value of this combined company. That represents a 59 percent premium to a 45-day average closing price for Norfolk Southern's stock before the deal reports surfaced.

Norfolk Southern shareholders would hold a 41 percent stake in the new company.

Even if Norfolk Southern backs a merger, it will face a challenging review from the federal Surface Transportation Board.

There have been no major railroad mergers since regulators imposed tough restrictions 2001. In addition to blocking any deal that reduces competition, railroads must come up with a plan to minimize service disruptions.

Stifel Nicolaus analyst John Larkin said Canadian Pacific has proposed an innovative approach to preserving competition by allowing shippers to use another railroad on the combined Canadian Pacific-Norfolk Southern network if the shipper didn't believe it was receiving adequate service.

But Larkin said the deal would need support from other railroads and major shippers, and if it were approved, the deal could trigger a rash of rail mergers that would likely disrupt traffic. Shares of other major railroads rose sharply Wednesday.

"Our bottom line is that odds are maybe 1 in 3, at best, that this merger actually comes to fruition in this complicated environment," Larkin said in a research note.