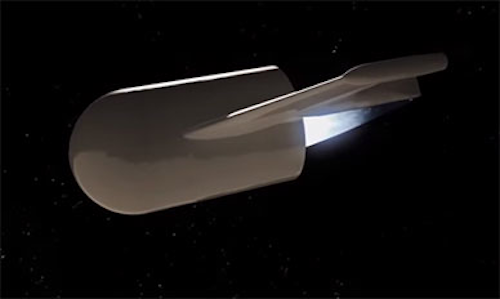 Over the last 60 years of space exploration, the rockets used to propel man-made vehicles or satellites into orbit simply plummeted back to earth once their tasks were completed.

The Airbus project, called Adeline, encases rockets and electronics in a large bullet-shaped vehicle. Once detached from the main spacecraft, a system of wings and propellers would guide the equipment safely back to earth for a runway landing.

Adeline could then quickly be serviced and prepared for another space flight.

The project, five years in the making, would still require a rocket's fuel tanks to come crashing back to Earth. It would, however, use less fuel than a rival system from Elon Musk's SpaceX.

SpaceX intends its Falcon 9 spacecraft to be completely reusable by using a system of rockets and aerodynamic wings to return the entire system — including the fuel tank — safety to Earth.

Airbus is developing its system for the European Space Agency's Ariane 6, which won't launch for at least another five years, but it says the technology could eventually be adapted to any rocket.