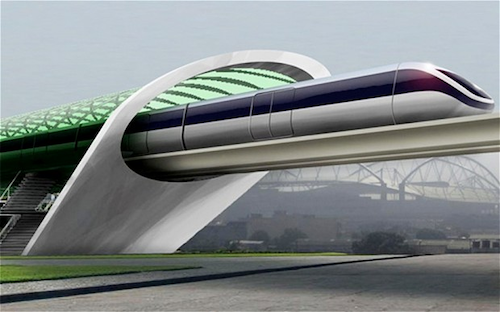 The contest will allow college students or independent engineering teams to construct a model for the compartment. The designs would then be tested at a mile-long SpaceX test track in suburban Los Angeles.

Musk outlined plans for the Hyperloop in a 2013 paper. The system would use fans and magnets to propel cars through pressurized tubes at speeds of up to 800 miles per hour.

It would also cost an estimated $8 billion to build a system running between Los Angeles and San Francisco.

SpaceX plans to hold a design event early next year at Texas A&M University and conduct tests — without people aboard — in June.

SpaceX reportedly plans to offer its own pod design, but the company would be ineligible to win the competition. Additional contest details will be released in August.

Musk, who also serves as CEO of Tesla Motors, previously said that while SpaceX isn't looking to build the Hyperloop, it hopes to help others advance the idea. He floated the possibility of a test track earlier this year but said at the time that it would likely be located in Texas.