Photos: One of the Last Remaining Old-Fashioned Soda Fountains

With a history that dates back to 1860, the Wilton Candy Kitchen in Wilton, Iowa quickly gained reputation as one of the last remaining old-fashioned soda fountains in operation today. 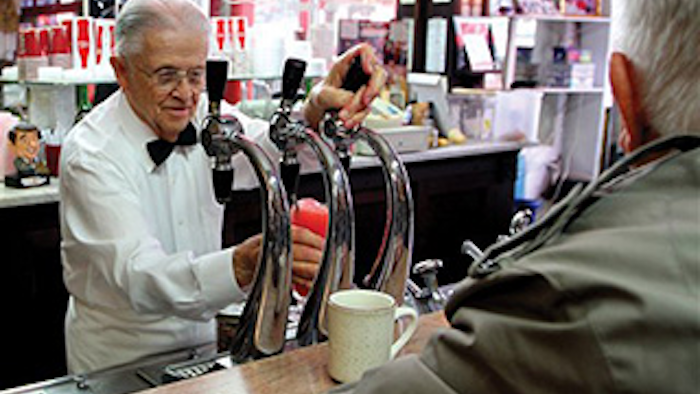 George Nopoulos, owner of the Wilton Candy Kitchen in Wilton, Iowa, died on Sunday at age 95.

For the majority of his life, Nopoulos served customers from his family's soda fountain, dishing out homemade ice cream, banana splits and chocolate sodas with a smile.

The restaurant started out as a small-town gathering spot in 1910 when Nopoulos' father, an immigrant from Greece, opened it. But by age 6, Nopoulos was working the counter and helping out with his family's business.

Over the years, the gathering place boomed into an Iowa landmark that was visited by celebrities and politicians alike, including actors Gregory Peck and Brooke Shield and President Dwight Eisenhower.

With a history that dates back to 1860, the business quickly gained reputation as one of the last remaining old-fashioned soda fountains in operation today.

This Dec. 28, 2012 photo shows George Nopoulos using the soda fountain from behind the counter at the Wilton Candy Kitchen in Wilton, Iowa. He made his first cherry Coke with the soda fountain when he was eight-years-old. Nopoulos, the longtime owner of a landmark Iowa soda fountain, has died Sunday, June 14, 2015, of natural causes in Wilton at age 95. (John Schultz/The Quad City Times via AP)

This June 4, 2009 photo shows Thelma and George Nopoulos posing for a photo while celebrating the 100th year of the Wilton Candy Kitchen being in the Nopoulos family in Wilton, Iowa. Nopoulos, the longtime owner of a landmark Iowa soda fountain, has died Sunday, June 14, 2015, of natural causes in Wilton at age 95. (Larry Fisher/The Quad City Times via AP)