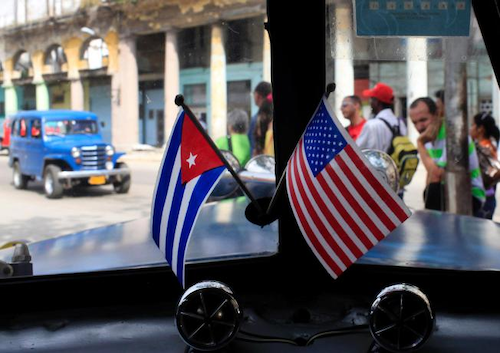 Analysts warn, however, that companies looking to expand into Cuba should proceed with caution after more than five decades of separation between the two countries.

The White House announced plans to normalize relations with Cuba last month — including restoring diplomatic ties and easing trade and financial restrictions — calling the U.S. stance toward Cuba since its 1959 revolution "outdated."

"Through these changes, we intend to create more opportunities for the American and Cuban people, and begin a new chapter among the nations of the Americas," President Obama said at the time.

This week, the Treasury and Commerce departments unveiled the language of changes to sanctions against Cuba, which include the opening of banking relations and expanding travel opportunities for Americans.

The changes also included broad language permitting the export of "tools, equipment, supplies and instruments for use by private-sector entrepreneurs" — particularly in the agricultural, construction and telecommunications sectors.

Previously, American companies had only been able to export humanitarian supplies such as food and medicine.

"I don't think any of us expected something quite as wide as this," said Ron Oleynik, a Washington, D.C. international trade attorney.

Companies looking to jump into the market, however, should remain wary, analysts said.

Congressional critics of the changes argue they violate the 54-year trade embargo against Cuba, which can only be lifted with congressional approval. The embargo appears likely to remain intact with Republicans now in control of both the House and Senate, and hearings on the administration's changes could be forthcoming.

Moreover, foreign trade is likely to be highly regulated by Cuba, and there are concerns the regime itself could take substantial portions of materials or investment coming into the country.

"My experience is the Cubans want to control as much as they can," said National Foreign Trade Council vice president Jake Colvin.