Foreign companies have suspended operations around the Tianjin port as officials scramble to contain the toxic fallout of last week's deadly chemical explosions, which dealt a blow to northern China's emerging economic hub. 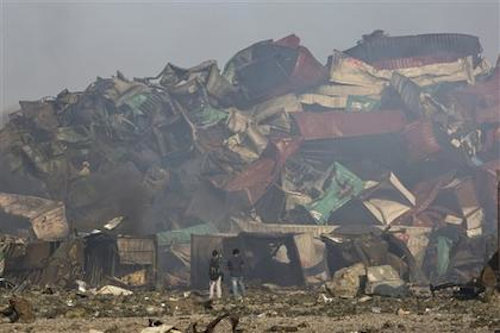 Foreign companies have suspended operations around the Tianjin port as officials scramble to contain the toxic fallout of last week's deadly chemical explosions, which dealt a blow to northern China's emerging economic hub.

Toyota, which has operations near the blast evacuation zone, said it had suspended three production lines, which account for over half of its China capacity, through Wednesday.

Thousands of Volkswagen, Toyota, Hyundai and Renault cars, most of them pricey imports, parked on lots near the blast were decimated.

The list of name-brand companies impacted by the blast is a testament to Tianjin's rise, but regulatory and safety lapses at the hazardous goods warehouses that exploded draw attention to the sometimes shaky infrastructure China has laid down as it pursues ultra-fast growth.

The port lies at the heart of one of China's new free trade zones, designed to draw foreign investment and create an economic hub for China's northeast that could one day rival the Pearl and Yangtze river deltas. The broader Binhai New Area has long been on the radar of Beijing's technocrats, who hope to integrate Beijing, Tianjin and Hebei into a single, thrumming economic powerhouse.

"This wasn't just an incident in some third-rate city. It was right at the heart of everything," said Chet Scheltema, a regional manager at international business consultancy Dezan Shira & Associates, who has lived and worked in Tianjin.

He said the explosions called attention to deficiencies in China's soft infrastructure, things like safety standards and emergency preparedness, which are usually overshadowed by China's shiny skyscrapers and impressive roads.

"There's still a lot to be done that's not immediately obvious," he said. "When you're trying to recruit your CEO and his or her family from the U.S. and they see these kinds of things on TV, or their family and relatives see this, they start to talk and think, should I really be going to China? Are they really the state-of-the-art economy we thought they were?"

Airbus built its first assembly line outside of Europe in Tianjin, which turns out four A320 aircraft per month. Spokesman Jacques Rocca said its facilities, 40 kilometers (25 miles) from the port, were unaffected. "We are evaluating what could be the impact in the coming weeks, but it will depend on the capability of the port of Tianjin to recover its activity," he said.

The Tianjin Maritime Bureau said Monday that 85 ships had been delayed or canceled, but that port traffic is now normal.

Genscape, which monitors commodity and energy markets, has documented normal oil and petrochemical taker traffic at the port. Fishing boat traffic fell by half the day after the blast, but has now partially rebounded, said Amir Bornaee, an oil analyst at Genscape.

Panasonic, which has a product development center 5 kilometers (3.1 miles) from the blast site, kept its offices closed Monday, out of concern for employee safety. A spokeswoman said executives were still evaluating whether to open the office Tuesday.

Hong Kong-listed logistics company Singamas Container Holdings, which has two depots close to the blast, told the stock exchange Monday that it had suspended operations at the site and lost contact with one employee. The filing said the company did not anticipate a material impact on business.

Automakers have been hit hard because Tianjin is one of China's major ports for car imports. Volkswagen said it had lost around 2,700 vehicles. Renault said 1,500 Koleos SUVs were damaged. Hyundai said it had around 4,000 vehicles, mostly high-end cars, parked at the site. The companies said they were still assessing the economic value of those losses.