Gridlock in Washington in recent years has stalled tax bills and other legislation aimed at helping small companies, but such proposals are expected to be on the agenda in the new Congress. 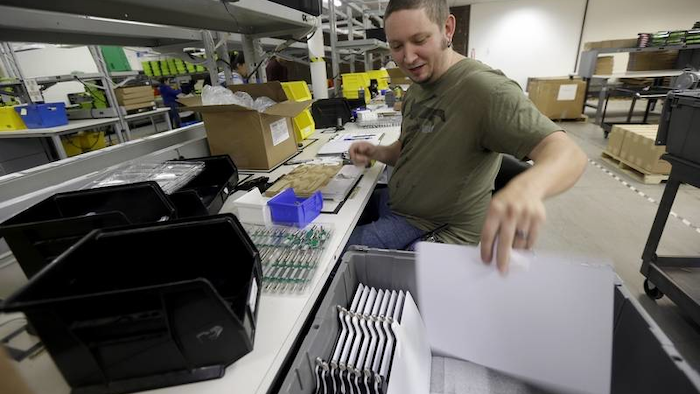 NEW YORK (AP) — Small business owners may get more help from Washington in 2015.

Gridlock in Washington in recent years has stalled tax bills and other legislation aimed at helping small companies, but such proposals are expected to be on the agenda in the Republican-led Congress. Democrats have opposed some proposals because of concerns about the impact of those tax breaks on the federal budget.

Parts of the healthcare law are likely to be debated. And lawmakers and the Small Business Administration hope to make it easier for companies to borrow.

"Small businesses are looking for government to function and get a lot more done," says John Arensmeyer, CEO of the advocacy group Small Business Majority.

But bills friendly to small businesses may not be a slam-dunk. Senate Democrats will have enough votes to filibuster and block GOP-sponsored legislation, and President Barack Obama can veto bills.

Obama and Republicans support a reduction in the corporate tax rate from the current 35 percent.

But small businesses might not benefit from that, because many company owners are sole proprietors, partners or shareholders in companies who report business income on personal returns.

It's not known how many people fall into those categories, as the IRS doesn't keep statistics on the number of 1040 personal returns filed by business owners. But their numbers are large enough that small business advocates want a cut in personal tax rates as well.

A corporate rate reduction might be accompanied by the elimination of some business deductions, leaving many one-person companies and partnerships at a further disadvantage, says Todd McCracken, president of the advocacy group National Small Business Association.

Small business tax deductions are also likely to be taken up by legislators. The GOP is expected to try to make permanent an upfront deduction for the cost of equipment like computers and machinery. That means a quicker tax break for small businesses than if they depreciate equipment over the course of three to 20 years. The deduction has fluctuated annually, and an increase in the 2014 deduction to $500,000 from $25,000 wasn't approved until Dec. 16

Another break that might become permanent is bonus depreciation, which accelerates the amount any business can deduct for property including buildings and equipment.

Congress is also expected to consider legislation to make it easier for small businesses to borrow. Democrats on the Senate Committee on Small Business & Entrepreneurship expect to reintroduce a bill to help women-owned businesses get small- and intermediate-sized loans backed by the SBA.

A similar bill was introduced in late July but made little progress.

Separately, the SBA plans to launch an online system during the second quarter that simplifies the lending process. It's expected to encourage more banks, particularly smaller ones, to make SBA-backed loans, says SBA Administrator Maria Contreras-Sweet.

"It's streamlined in terms of there's no paper," Contreras-Sweet says.

The owners of Xero Shoes hope for an easier time getting an SBA loan in the new year. The application and approval process they went through for a $500,000 loan in 2014 took eight months, longer than the two months their lender initially forecast.

Their financial records were in order, but they had to produce documentation to prove Xero was a small business and conformed to other requirements for the loan.

"I was unprepared for how much paperwork would be involved and how time-consuming it would be," says Lena Phoenix, chief operations officer of the Boulder, Colorado, shoe manufacturer.

Republicans are expected to try to repeal the healthcare law but Obama will veto a bill if it passes Congress, says Karen Kerrigan, president of the advocacy group Small Business & Entrepreneurship Council.

A section of the law whose repeal has bipartisan support is a 2.3 percent tax on the sale of medical devices, items ranging from examination gloves to X-ray machines. Opponents say the tax hurts manufacturers, including small businesses. Expect the GOP to seek a repeal soon after Congress convenes, Kerrigan says.

Another expected target: The requirement that companies that must offer insurance make it available to employees working 30 or more hours a week. Opponents want that threshold raised to 40 hours.

"As long as we don't undermine the intent of the law, I think that's something we should take a look at," says Sen. Ben Cardin, D-Md., who will be the most senior Democrat on the Senate's small business committee.