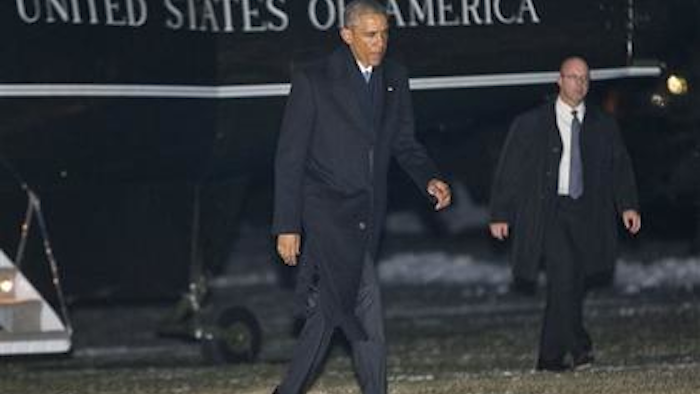 Obama visited a Ford plant in Wayne, Michigan to kick off a three-state tour ahead of his State of the Union Address later this month.

The president highlighted his administration’s efforts in the wake of the recession, saying “America’s resurgence is real.”

"Plants like this one built more than cars,” Obama said. “They built the middle class in this country and that’s worth fighting for.”

“But the administration fails to mention that we’ve only recovered one-third of the good-paying manufacturing jobs that were destroyed in the recession,” Paul said. “We still have a long way to go.”

That success, however, did not extend to Ford, which saw flat sales as it transitioned to a new F-150 truck model.

Fiat Chrysler posted a 16 percent sales increase amid ongoing concerns about older Jeep models and a recall of airbags made by Takata Corp. that affected most auto companies.

Falling gas prices — particularly in the latter half of 2014 — and the resulting rise in consumer confidence likelyhelped bolster vehicle sales, although automakers that have shifted to smaller, more fuel-efficient cars are likely to be challenged by an increased demand for trucks and SUVs.

Meanwhile, the Obama administration last month announced the end of the auto company bailout program enacted in the wake of the 2008 financial meltdown. With the Treasury Department selling its final holdings in Ally Financial, formerly GM finance agency GMAC, officials announced the government had recovered $70.42 billion of the $79.68 billion allocated through the program — a final cost to taxpayers of $9.26 billion.

Paul lauded the recovery plan as well, saying it put "the entire auto supply chain on sound footing in the face of potential economic doom" while calling the current health of the country's auto industry "a point of national pride."

But Paul also said the Obama administration appears "tone-deaf" to automakers' concerns over the proposed Trans-Pacific Partnership. He called on the White House to use ongoing negotiations over the trade agreement, which would include the U.S. and 11 other Pacific Rim nations, to address concerns over currency manipulation by Japan.

"If President Obama wants to do right by Michigan and auto workers, he’ll change course on the TPP, and fast," Paul said.