Fewer Americans applied for unemployment benefits last week, a sign that employers expect ongoing economic growth and the need to hold onto workers. 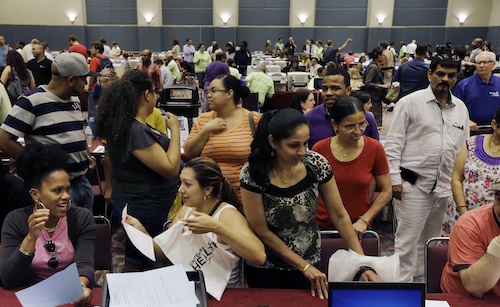 The four-week average, a less volatile measure, slipped 250 to 290,500. That average has plunged 16 percent in the past 12 months, as averages have stayed at historically low sub-300,000 levels since September.

Applications are a proxy for layoffs. As fewer workers are being let go, employers are bringing on new employees to meet customer demand.

In the monthly jobs report being released Friday, employers are expected to have added 243,000 jobs in December, according to FactSet. That would follow job gains of 321,000 in November and put total job growth in 2014 at just shy of 3 million, the best performance since 1999.

In a separate report Wednesday, payroll processor ADP said that private companies added 241,000 jobs in December, up from 227,000 in November. It was a good indicator that hiring should be solid in Friday's U.S. report, which has shown job gains in excess of 200,000 for the past 10 months.

Still, wage growth has lagged hiring. Average wages increased only 2.1 percent in the past 12 months. That means that incomes are only barely outpacing inflation. Core consumer prices — which excludes volatile energy and food costs — have risen 1.7 percent over the past 12 months.