The latest version of the sports car, due out in September, has features that helps the car tattle on any valet who doesn't take a slow, direct route to a parking space. 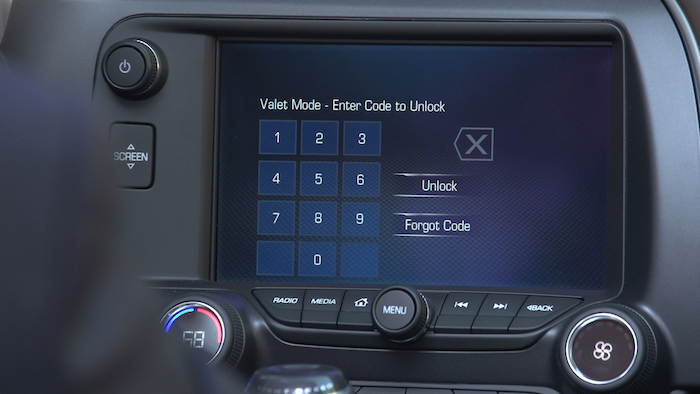 DETROIT (AP) — Face it. If you own a luxury or sports car, whenever you hand the keys to a valet, you imagine the car going on a high-speed joyride like the Ferrari in the 1980s cult movie "Ferris Bueller's Day Off."

Now, General Motors has an option on the 2015 Chevrolet Corvette that takes those worries away.

The latest version of the sports car, due out in September, has a feature that records where the car goes with a camera mounted in the windshield trim. It also captures audio in the cabin as well as speed, engine revolutions per minute, gear position and G-force. That all helps the car tattle on any valet who doesn't take a slow, direct route to a parking space.

GM says it's the most extensive attempt by an automaker to thwart valet joyriders, although it's not the first. The automotive website Edmunds.com says Hyundai and Mercedes offer "geofencing," a feature that sets a perimeter and then notifies the owner's smart phone if a car goes beyond it. Chrysler has a valet mode that caps engine speed and horsepower, while Audi lets owners limit engine speed for valets.

With the Corvette, once the owner activates the feature with a four-digit code, the touch screen tells the driver it's in Valet Mode. But it doesn't warn the valet that he's being recorded. The feature also locks the glove box and a storage compartment in the dashboard and shuts down the infotainment system.

Valet Mode started off as a performance data recorder for those who take their Corvettes on the racetrack. GM engineers quickly figured out that it had more uses.

"Think of it as a baby monitor for your car," Corvette Product Manager Harlan Charles said in a statement. "Anyone who has felt apprehension about handing over their keys will appreciate the peace of mind of knowing exactly what happened while their baby was out of sight."

Data and video from the valet mode can be viewed instantly by the owner on the car's 8-inch color screen when the car is parked, or it can be downloaded to a computer.

The system could go into more mainstream models if feedback is good on the Corvette, GM spokesman Monte Doran said.