U.S. employers added 169,000 jobs in August and much fewer in July than previously thought. Hiring has slowed from the start of the year and could complicate the Federal Reserve's decision later this month on whether to reduce its bond purchases. 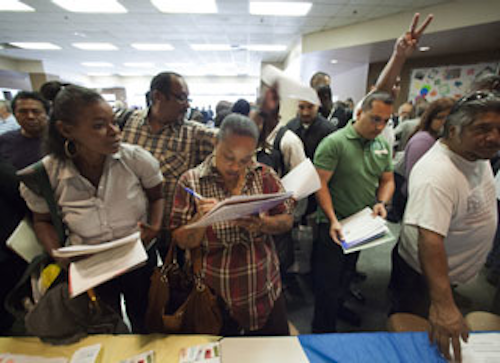 WASHINGTON (AP) — U.S. employers added 169,000 jobs in August and much fewer in July than previously thought. Hiring has slowed from the start of the year and could complicate the Federal Reserve's decision later this month on whether to reduce its bond purchases.

The Labor Department said Friday that the unemployment rate dropped to 7.3 percent, the lowest in nearly five years. But it fell because more Americans stopped looking for work and were no longer counted as unemployed. The proportion of Americans working or looking for work fell to its lowest level in 35 years.

Dow Jones industrial average futures rose modestly after the report was released. The yield on the 10-year Treasury note fell to 2.87 percent, from 2.95 percent, in the first few minutes after the jobs figure was released.

The weaker jobs picture could make the Fed hesitate to scale back its bond buying. The Fed's $85 billion a month in Treasury and mortgage bond purchases have helped keep home-loan and other borrowing rates ultra-low to try to encourage consumers and businesses to borrow and spend more.

Chairman Ben Bernanke has said the Fed could begin slowing its bond purchases by year's end if the economy continues to strengthen and end the purchases by mid-2014. After its September policy meeting, the Fed will announce whether it will taper its monthly purchases and, if so, by how much.

Another concern for the Fed is that most of the hiring in August was in lower-paying industries such as retail, restaurants and bars, continuing a trend that began earlier this year. Retailers added 44,000 jobs and hotels, restaurants and bars added 27,000. Temp hiring rose by 13,000.

Manufacturers added 14,000, the first gain after five months of declines. Construction jobs were unchanged in August. .

Auto manufacturers boosted hiring in August. Some of the jobs were workers who were rehired last month after being temporarily laid off in July, when factories switched to new models.

Americans are buying more cars than at any time since the recession began in December 2007. And U.S. factories expanded in August at their fastest pace in more than two years.