By shedding the bulk of its European operations, General Motors is getting rid of a perennial money drain and gaining essential cash that it can use to reward shareholders and invest in future technology such as electric cars and ride-sharing. 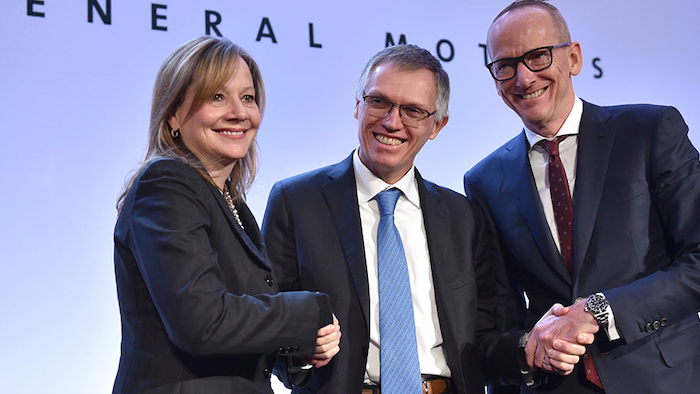 DETROIT (AP) — By shedding the bulk of its European operations, General Motors is getting rid of a perennial money drain and gaining essential cash that it can use to reward shareholders and invest in future technology such as electric cars and ride-sharing.

The Detroit automaker also indicated that it may pull out of more unprofitable markets in the future.

GM on Monday sold its European Opel and Vauxhall brands to French carmaker PSA Group for roughly $2.33 billion, retreating from the world's third-largest auto market after almost two decades of futile efforts to make money. The brands have lost $20 billion in the fiercely competitive region since last making a full-year profit in 1999.

"I think they're ready to cut their losses and move on," said Morningstar analyst David Whiston. "They'd rather take their time and money and spend it elsewhere on something that has a better return."

The sale, expected to close by the end of the year, also includes GM's European auto financing arm, which goes to a joint venture between PSA and French bank BNP Paribas. GM has to keep $6.5 billion in unfunded pension obligations. But it unloads any future losses and about $1 billion per year in capital expenditures on new products.

Chief Financial Officer Chuck Stevens told reporters that the sale also means GM only has to keep $18 billion on hand to weather an economic downturn, rather than $20 billion. That $2 billion will go to speed up a company commitment to buy back $8 billion worth of stock. GM could repurchase as much as $5 billion this year.

The sale also was influenced by stronger European clean-air regulations that will require significant spending on electric-car development, as well as currency issues caused by Britain's exit from the European Union, GM said.

"Increasing regulatory and compliance costs will continue to be a burden for the foreseeable future," President Dan Ammann said. After the sale, PSA, with a larger scale in Europe, can spread those costs over more vehicles, he said.

GM Chairman and CEO Mary Barra told analysts that the sale may not be GM's last. She said the company has work to do on some international businesses and could make a similar deal for them if they don't make enough money. GM has operations in Asia, South America, the Middle East, North America and elsewhere.

GM still will sell small numbers of high-performance Chevrolets and some Cadillacs in Europe. The deal doesn't include ride-sharing or other mobility ventures in Europe.

For PSA, which makes Peugeot and Citroen cars, the acquisition will turn it into Europe's No. 2 automaker after Volkswagen, capping a remarkable turnaround after it was bailed out just three years ago.

PSA will take over 12 Opel and Vauxhall manufacturing facilities that employ about 40,000 people, the companies said, fueling worries that jobs eventually will be cut.

Executives insisted that no layoffs are currently foreseen, while analysts say they're inevitable over the long term. CEO Carlos Tavares said there are ways to contain factory costs other than cutting workers. He said the company would focus on logistics, quality, energy, maintenance and security.

Opel and Vauxhall last year sold just under 1.2 million vehicles, amounting to only 5.6 percent of the European market, according to GM.

Christian Stadler of Warwick Business School warned that job cuts likely will be coming: "PSA has done it before and there is no other way to realistically achieve the cost savings they have in mind."

"The U.K. is definitely in a bad position as Brexit makes it less competitive than Germany and the unions are stronger in Germany," he said.

U.S. investors yawned at the sale. Shares in General Motors Co. slipped about 1 percent to $37.91 Monday. They're up 9 percent since the first of the year, indicating that investors already were anticipating benefits from the deal.