The fires were spotted in a car parking lot and at three other locations within a 3-kilometer (1.8-mile) evacuated area, the official Xinhua News Agency said. 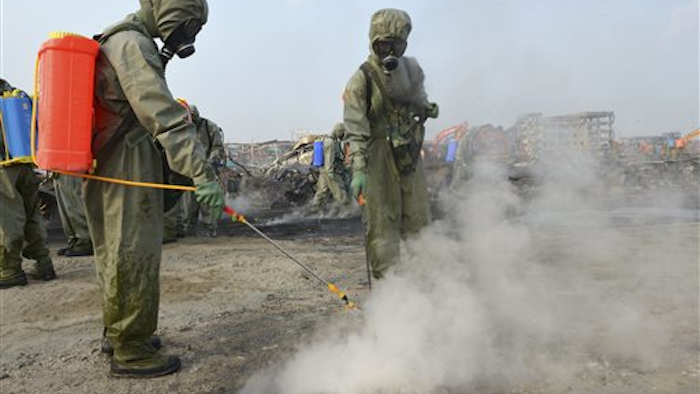 ​TIANJIN, China (AP) — Four new fires burned Friday within a disaster zone in China's Tianjin port where massive warehouse explosions more than a week ago killed at least 116 people and contaminated the area with toxic chemicals.

The fires were spotted in a car parking lot and at three other locations within a 3-kilometer (1.8-mile) evacuated area, the official Xinhua News Agency said. It did not give more details, but the state-run Legal Evening News said firefighters put out the fire in the parking lot and that cleanup work in the disaster zone soon resumed.

Technicians have detected levels of cyanide as much as 356 times the safe level within the evacuated zone, although no abnormal contamination was found outside the zone, according to state media reports.

Workers in protective suits have started clearing wreckage, including charred car bodies and crumpled shipping containers, from the area of chemical warehouses that exploded Aug. 12. Xinhua said excavating equipment was being used to clear the site, and trucks were carrying out debris.

The financial new media group Caijing said Friday that small animals such as rabbits, pigeons and chickens were placed in the disaster zone to test whether it is safe for humans.

Officials have ordered nationwide checks on dangerous materials. Driving home the importance of such efforts, President Xi Jinping and other top leaders gathered in Beijing to hear a report on progress in investigating the disaster.

Suspicions that official corruption contributed to the disaster were underlined in revelations Wednesday in a Xinhua article that the two silent owners used their connections with police, fire, port and workplace safety officials to secure approval for their company, Ruihai International Logistics, to operate warehouses for hazardous materials.

The Ruihai owners were able to secure permits to store toxic chemicals, including sodium cyanide, ammonium nitrate and potassium nitrate, even though their facility is located less than the required 1,000 meters (yards) from homes and public roads — a clear violation of state safety rules.

An Associated Press review of corporate documents found that the principal owner, Yu Xuewei, also was a board member of a state-owned company that operates hazmat warehouses that have similarly been accused of violating the 1,000-meter rule. The state-owned company's parent, Sinochem, has disavowed any connection with Ruihai.

The explosions that rocked Tianjin were among China's worst industrial accidents in recent years and the deadliest on record for the country's firefighters, who accounted for 104 of the 176 total dead and missing. Authorities say 646 people remain hospitalized, including 52 in critical or serious condition, while 30,000 people in and around the area have had their lives turned upside down by the disaster.

Authorities said schools in the neighborhood are expected to start on time this fall.

Premier Li Keqiang on Thursday said the investigation into the disaster must be thorough and cover all parties that helped the company obtain the license to store hazardous materials.