In response to high demand for year-round local produce, researchers with the University of New Hampshire report they have successfully grown bulbing onions planted in fall for a spring harvest with the aid of inexpensive low tunnels. 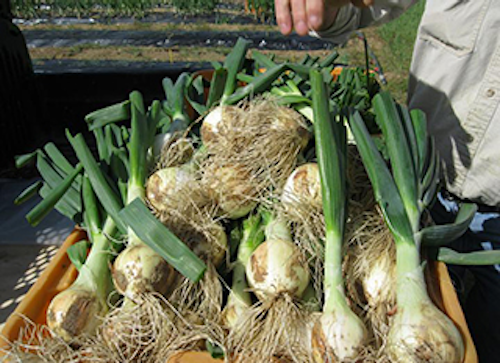 In response to high demand for year-round local produce, researchers with the University of New Hampshire report they have successfully grown bulbing onions planted in fall for a spring harvest with the aid of inexpensive low tunnels.

The new research, which was funded by the NH Agricultural Experiment Station (NHAES) and by Northeast SARE (Sustainable Agriculture Research & Education), may provide additional marketing opportunities for growers in cold climates who have been trying to meet the demands for fresh, year-round, locally grown produce.

"Direct-market sales are the primary outlet for growers in our region, and these off-season onions would likely be sold individually at sizes determined by local market preferences," the researchers said.

NHAES faculty researcher Becky Sideman, extension professor of sustainable horticulture production at UNH, and her colleagues with the University of Massachusetts-Amherst, University of Massachusetts Extension, and UNH Cooperative Extension, present their research findings in the December 2014 issue of HortTechnology in the article "Production of Bulbing Onion Overwintered in New Hampshire with Protection by Low Tunnels."

Sideman and her colleagues evaluated the survival, bolting, and bulbing of several cultivars of fall-planted onion in two sites in New Hampshire over two growing seasons. Plants were seeded in August and September, and transplanted in September and October into raised beds covered with black plastic mulch. Low tunnels were installed over the plants in late fall. Onions were harvested from mid-April to early June 2012 and late May to early July 2013.

They also concluded that cultivar selection plays a critical role in successful overwintering of onion production systems in cold climates. All plants that survived the winter and did not bolt produced a marketable bulb. In particular, for Bridger, T420, Top-Keeper, and Keepsake yellow cultivars, 85 to 100 percent of the plants met these criteria, which corresponds to a potential yield of 37,000 to 43,500 bulbs per acre.

"While this is considerably lower than expected yields for major onion production regions, these yields may be commercially viable in a high-value, direct-market situation," the researchers said.

The University of New Hampshire, founded in 1866, is a world-class public research university with the feel of a New England liberal arts college. A land, sea, and space-grant university, UNH is the state's flagship public institution, enrolling 12,300 undergraduate and 2,200 graduate students.