U.S. businesses ramped up hiring last month in the latest sign that the nation's economy is expanding despite worries about global growth that have sent financial markets tumbling. 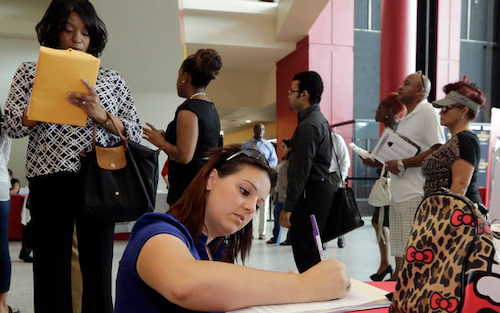 WASHINGTON (AP) — U.S. businesses ramped up hiring last month in the latest sign that the nation's economy is expanding despite worries about global growth that have sent financial markets tumbling.

Payroll processor ADP said Wednesday that companies added 241,000 jobs in December, up from 227,000 in November. That suggests Friday's government report on December job gains will also be healthy.

The ADP numbers cover only private businesses and sometimes diverge from the government's more comprehensive report, which includes government agencies.

Economists forecast the government's figures will show that employers added 240,000 jobs in December, according to a survey by financial data provider FactSet. The unemployment rate is expected to remain at 5.8 percent.

Hiring was solid across most large industries and company sizes. Manufacturers added 26,000 jobs, the second-highest monthly total in 2014 and up from 16,000 in November. Construction firms added 23,000, up from 20,000 the previous month.

Strong economic growth has encouraged employers to ramp up hiring. The economy expanded at a 5 percent annual rate in the July-September quarter, the healthiest pace since 2003. And that followed 4.6 percent growth in the April-June quarter.

Employers added nearly 2.7 million new jobs in the first 11 months of last year, the most since 1999. Still, the job market is not yet back to full health. There are about 9.1 million unemployed people, up from about 7.5 million before the Great Recession. And 6.8 million people are working part-time but would prefer full-time work, up from just 4.1 million before the downturn.