The First Lady visited a school on Manhattan's Upper West Side to announce a $500 million donation funding the fight against childhood obesity. The initiative encourages educators to serve healthier food and urges manufacturers to produce quality food. 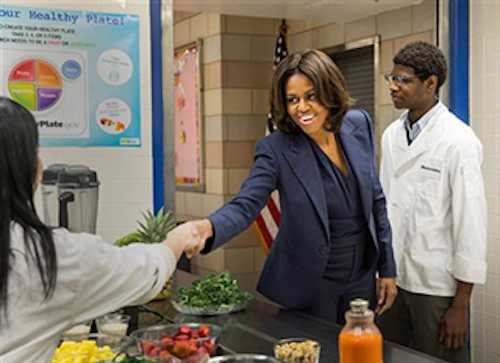 As she watched teenagers prepare smoothies at the Edward A. Reynolds West Side High School and stepped into a room of students taking a spin class, Obama noted that it was the fifth anniversary of the federal Let's Move effort.

"Together, we started a national conversation on this issue and we're seeing changes at every level from individual schools to families to the halls of Congress," she said, adding that average obesity rates have stopped rising, or even dropped among the youngest children.

The money announced Thursday comes from the Robert Wood Johnson Foundation. The initiative encourages educators and families to serve healthier food and to organize more exercise, while cutting back on snacking as well as portion size, avoiding things like sugary drinks and lobbying manufacturers to produce quality foods.

The foundation also had donated $500 million in 2007 toward improving children's eating and life habits.

"But back in 2007, many folks just didn't think that child obesity was a serious issue," the first lady said.

Obama said she chose to visit the Manhattan high school because it already is serving healthier meals under the leadership of Principal Jean McTavish, who teaches some of the early morning spin classes.

"What's going on here?" the first lady asked several student cooks, smiling as she examined their ingredients lined up on a counter.

Minutes later, she strolled into the spin room, filled with students already pumping the bicycle pedals.

The answer was nonverbal: They all started spinning faster as she clapped rhythmically and danced briefly to the music.

"That's great!" she said, adding later, "But we still have a long way to go."