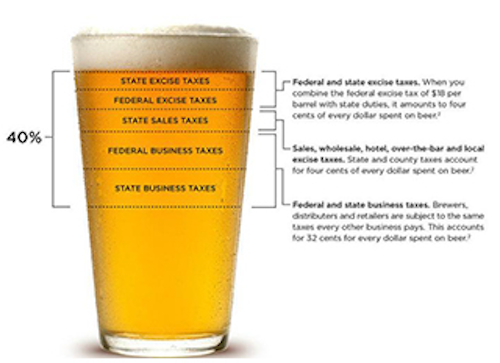 Under the Fair BEER Act, all brewers and beer importers would pay a rising scale of federal excise tax:

By imposing this "laddered" approach to all brewers and beer importers, the legislation reforms the overall tax structure to provide the greatest relief to the very smallest brewers. More than 90 percent of permitted brewers produce 7,143 barrels or less and would see their excise tax rates reduced from $7/barrel to zero. The 7,143 barrel threshold was designed to meet the definition of a "small brewer" set forth by the U.S. Department of Treasury's Alcohol and Tobacco Tax and Trade Bureau (TTB), the agency which regulates the alcohol industry.

By applying comprehensive reform across brewers, the legislation removes barriers to growth.  Under current law, small brewers are defined as those which produce up to 2 million barrels, and are taxed at $7/barrel on the first 60,000 barrels and $18 on every barrel thereafter. Current law imposes an $18/barrel federal beer tax on all suppliers of more than 2 million barrels annually.

"Our tax policies shouldn't discourage the growth and continued success of an industry that supports jobs for more than two million Americans, and it shouldn't pick the winners and losers in the market," said Congressman Womack.  "This comprehensive reform bill supports brewpubs, microbrewers, national craft brewers, major brewers, and importers alike and encourages their entrepreneurial spirit, which is exactly the spirit we need to get America's economic engine going again."

"The beer industry has shaped our heritage and history in Wisconsin, and plays a crucial role in our state's economy," said Congressman Kind. "Here in Wisconsin and across the nation, brewers are employing our workers and creating new jobs, and this pro-growth, bipartisan bill will help them continue to expand and produce high-quality products."

"This bill is important for reforming a hidden tax that most beer drinkers don't even know they pay, and because it removes barriers to industry growth," said Jim McGreevy, president and CEO of the Beer Institute, the nation's leading trade association representing brewers, beer importers and industry suppliers. "The Fair BEER Act deserves support, because it offers fair reform of the federal beer tax, but it reaches that reform without completely changing the industry structure."

By offering tax reform across the category, from pennies on the barrel for major suppliers to an $18/barrel tax break for the smallest brewers, the Fair BEER Act offers Members of Congress an opportunity to support all brewers, from the smallest brewpubs to the biggest job creators. The Fair BEER Act also serves to fix a significant policy issue around trade by protecting small brewers from potentially losing their tax relief.

Companion legislation is expected to be introduced in the U.S. Senate shortly.

History of the Federal Excise Tax on Beer
Existing federal excise taxes on beer are set at a rate of $18/barrel for brewers of more than 2 million barrels (62 million gallons, or the equivalent of 110 million six-packs) and all beer importers. Since the late 70s, growth in the small brewing sector has been encouraged by tax credits offered to brewers which produce less than 2 million barrels, cutting their excise tax rate to $7/barrel on the first 60,000 barrels and allowing them a far lower overall effective tax rate on all barrels up to 2 million.

Today there are more than 3,300 breweries in the United States. More than 90 percent of those brewers produce fewer than 7,143 barrels annually, meeting the definition of a small brewer set by the Alcohol and Tobacco Tax and Trade Bureau (TTB). Many of those small brewers are brewpubs, which are restaurants with brewing operations designed to sell locally.

While the reduced tax rate for brewers has been a success in introducing new entrants to the market, the eligibility definition of "small" at 2 million barrels unintentionally created a barrier to further growth. By removing the production cap to allow all brewers and beer importers relief, and graduating the relief in such a manner that the deepest reductions in rates are reserved for the newest entrants to the market, the Fair BEER Act reforms the beer tax without altering the industry structure, or picking winners and losers in the marketplace.

The Beer Institute is the national trade association for the American brewing industry, representing both large and small brewers, as well as importers and industry suppliers. First founded in 1863 as the U.S. Brewers Association, the Beer Institute is committed today to the development of sound public policy and to the values of civic duty and personal responsibility: www.BeerInstitute.org. Connect with us @BeerInstitute and on Facebook.