West Coast Port Employers: Shutdown Could Be Days Away

West Coast seaports could shut down in as soon as five days — hobbling U.S. trade with Asia — if dockworkers and their employers cannot reach a new contract, the head of a maritime association warned Wednesday in remarks intended to pressure an agreement after nine months of negotiations. 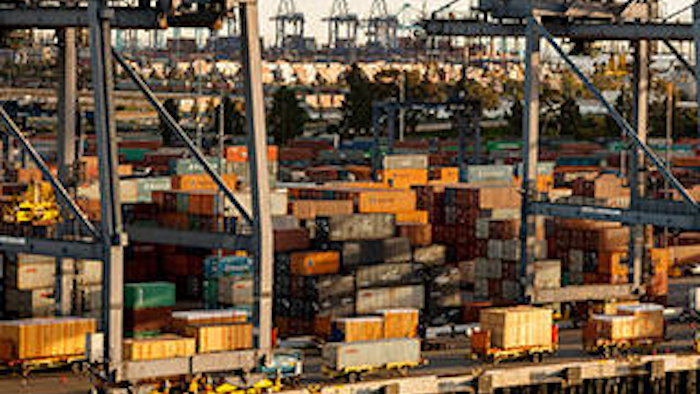 LOS ANGELES (AP) — West Coast seaports could shut down in as soon as five days — hobbling U.S. trade with Asia — if dockworkers and their employers cannot reach a new contract, the head of a maritime association warned Wednesday in remarks intended to pressure an agreement after nine months of negotiations.
Operators of port terminals and shipping lines do not want to lock out longshoremen, but that would be inevitable if cargo congestion persists at ports that handle about $1 trillion in trade annually, Pacific Maritime Association CEO James McKenna said.
The maritime association has been negotiating since May with the International Longshore and Warehouse Union, which represents dockworkers at 29 ports from San Diego to Seattle. For months, employers have said ports in Los Angeles/Long Beach, Oakland and Washington state are on the "brink of gridlock" — and in recent weeks, queues of massive ships have grown longer in the waters off docks now stacked high with containers of goods.
On Wednesday, McKenna said the congestion crisis has reached a tipping point, and it would make no sense to pay crews if there is no way to move cargo containers into the flow of commerce because dockside yards are too jammed.
"The system can only take so much," McKenna told reporters by phone before returning to negotiations in San Francisco. "At some point, this will collapse under its own weight."
Without a new contract, employers could begin a lockout in as soon as five days, or as many as 10 days. "I couldn't tell you exactly, but I can tell you it's imminent," McKenna said.
Congestion began building earlier last year, even before the last contract expired July 1. Employers have said union-coordinated work slowdowns exacerbated the problem, and provided data that cargo has been moving at about half its normal rate since the fall.
The union has disputed slowdown claims. Its members instead blame the congestion on issues beyond their control, including a shortage of truck beds to take containers from the docks to distribution warehouses.
In response to McKenna's remarks — his most extensive public comments since talks began in May — the union said the differences between negotiators are now small.
"We've dropped almost all of our remaining issues to help get this settled — and the few issues that remain can be easily resolved," union President Robert McEllrath said in a written statement.
McEllrath said a worker lockout would be "reckless and irresponsible."
In his remarks, McKenna also detailed the proposal his association made Tuesday, which his characterized as his "best offer" even as he said he would be open to reasonable changes.
He said that a proposed 5-year contract included wage increases of about 3 percent annually, an increase in pension contributions, the maintenance of hefty health benefits and an agreement to let the union have jobs inspecting truck chassis.
Wages for full-time workers currently average $147,000 per year, McKenna said. Union spokesman Craig Merrilees called that figure "a PR fantasy number," saying that while some workers earn that much, the true average is less than $100,000, in part because many longshoremen don't work full-time, and when they do, pay ranges from $26 to $36 per hour.
Latest in Operations