Bugs Crawl Onto the Menu at Le Cordon Bleu

Bugs in a gourmet kitchen are usually something to be squashed or swatted. But at Le Cordon Bleu, the esteemed French cooking school, chefs and food scientists spent a week simmering, sauteing and grilling insects to extract innovative flavors. 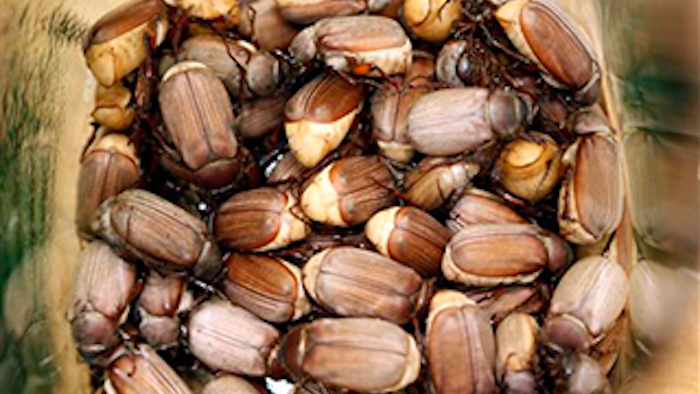 BANGKOK (AP) — Bugs in a gourmet kitchen are usually something to be squashed or swatted. But at Le Cordon Bleu, the esteemed French cooking school, chefs and food scientists spent a week simmering, sauteing and grilling insects to extract innovative flavors they say could open a new gastronomic frontier.

As a finale to their research, the school's Bangkok branch held a seminar Thursday called "Edible Insects in a Gastronomic Context," which booked up weeks in advance. The event included lectures and a tasting menu for 60 open-minded participants, a mix of student chefs, scientists, professors and insect farmers.

First came a vial of ant-infused gin, followed by a shot glass of warm cricket consomme, then an hors d'oeuvre of cockchafer butter and herb crisp. For the unfamiliar, a cockchafer could be mistaken for a water bug but is in fact a giant beetle.

The insects were not visible in the final products but artfully hidden, pureed into batters, their juices extracted for essence.

"We didn't want to just put a bug on a salad and say, 'Voila!' We wanted to know, can we extract interesting flavors, new textures, aromas and turn it into something delicious?" said Christophe Mercier, an instructor who helped organize the event in the Thai capital.

Before anyone else could crack a joke about bugs in fine French food, the chefs made their own.

"This is the first time that insects have been granted access to the Cordon Bleu," Mercier said with a smile, adding that the 120-year-old Paris-based school had never to his knowledge held a workshop quite like this.

At the school's entrance, a welcome table was decorated with tropical flowers and bowls of bugs — crickets, silk worms, bamboo worms and live water bugs as big as a toddler's hand.

The idea for the event was inspired by local eating habits in Southeast Asia. In Thailand and neighboring countries, many people eat fried insects as snacks, leading Mercier and colleagues to wonder if they could learn from the locals. He ran the idea past his Paris headquarters and "they were excited by the idea," he said.

"You have to approach this with a really open mind," said Roberto Flore, head chef at the Nordic FoodLab, a Copenhagen, Denmark-based laboratory devoted to discovering new tastes for cooking. The lab started a project called the "Deliciousness of Insects" in 2012 and was invited by the Cordon Bleu to work with its Bangkok-based chefs this week and help develop the recipes that were presented at the seminar.

Flore brought along certain products from his lab, where he first created the cricket consomme and the gin, which he described as having "an explosion of lemony taste" that came from acid produced in the ants' abdomens.

It was the gin that helped win over the chefs.

"I was very surprised with the consomme, too," he said about the broth served in a shot glass. Participants described it as meaty, nutty, flavorful, subtle and not-at-all grainy. "It was light, yet full with aroma and flavors — flavors of the insect," Danniel said.

A Cordon Bleu chef, Christian May, admitted privately that he was initially repulsed by the intense aroma of the grilled crickets for the broth. He encouraged his colleagues not to demonstrate for the seminar how the consomme was made but just serve it elegantly on trays, which they did.

"It tasted good. You just have to remove the image of the insect from your mind," he said, noting that this will be the biggest challenge if and when insects go mainstream in Western cuisine.

Before that happens, more research is needed. It's not clear if serving insects is legal in all Western countries. Proper hygiene needs to be ensured at insect farms. There are also safety concerns.

"We do have to be a bit careful," said Alan Yen, an insect expert and professor from Australia's Latrobe University, who suggests never eating raw insects and says anyone with a seafood allergy should probably steer clear of bugs. "Some insects are toxic, some have allergens. There are medical complications with some people."

Chefs should tap the knowledge of cooks in countries where insects are commonly eaten, he said. According to the U.N., insects have long been part of human diets in nearly 100 countries, particularly in Asia, Africa and Latin America.

In Thailand alone, there are 200 species of insects eaten as food, said Patrick Durst, a senior official with the U.N. Food and Agriculture Organization who has co-authored a study on Thailand's edible insect industry. To people who frown on eating bugs, he says this: "Take a look at shrimp. What an ugly creature. Is it any more attractive than a grasshopper?"

And what about snails, said French chef Willy Daurade, who made the evening's dessert — a "bamboo worm bite."

"We eat escargots," said Daurade. "They're ugly. But in fact it's delicious."

After the seminar, the chefs repaired to a back room for a glass of champagne and congratulated themselves on a good start.

"This is not the end of the story," said Danniel, the master chef. "We want to develop more recipes, hold another workshop and maybe even write a cookbook."