To be more productive at work, pick-me-ups like coffee, energy drinks and tea are more popular choices than energy bars, smoothies or juices. About 93 percent of respondents said they have taken action to boost their energy at work, with caffeine as a top workplace necessity. 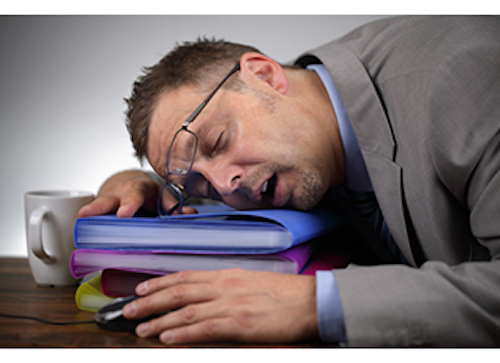 SANTA MONICA, Calif. (PRNewswire) — In today's fast-pacedworkplace with demands to respond right away at nearly any hour of the day, fatigue is leading the charge as the top barrier to peak performance.  According to a new workplace survey commissioned by Red Bull and Glassdoor, the leading jobs and recruiting community, nearly half (48 percent) of employed Americans1 are distracted by fatigue at work, causing them to make mistakes and even doze off.  Tiredness is a bigger distraction to workers than social media (19 percent) and personal communications (35 percent).

More than just typos, fatigue at the workplace shows itself in various ways, with 23 percent of respondents admitting to walking around the workplace with an unbuttoned top or mismatched shoes. Lack of energy has also shown it greatly impacts employees' ability to focus, with 24 percent of workers confessing to addressing a colleague or client by the wrong name or making a mistake via email due to low energy.

"It's clear that fatigue at work can impact productivity and efficiency, and this is something both employees and employers need to be aware of and address among their specific workforce," said Scott Dobroski, Glassdoor Community Expert. "This is a wake-up call for employers to review and assess how to keep their employees engaged throughout the day and make appropriate changes."

To be more productive at work, pick-me-ups like coffee, energy drinks and tea are more popular choices than energy bars, smoothies or juices.  U.S. workers are so desperate to combat tiredness, 93 percent of respondents said they have taken action to boost their energy at work, with caffeine as a top workplace necessity, even surpassing taking a walk or listening to music.  In fact, 48 percent can't live without caffeine at work and just as many (46 percent) can't live without office supplies such as pen and paper.  Fewer find it essential to have their smartphone or tablet (44 percent) or their schedule (32 percent).

Battle of The Sexes:

The workplace survey was conducted between October 7-14, 2014 among 549 working Americans ages 18 and over, using an email invitation and an online survey. Results of this survey are subject to sampling variation. The magnitude of the variation is measurable and affected by the level of percentages expressing the results and the number of interviews. The margin of error for any subgroups will be slightly higher. Complete survey methodology is available upon request.

1  For the purposes of this survey, employed Americans is defined as U.S. adults ages 18 and over who are employed.

Red Bull Energy Drink's effects have been recognized worldwide by busy professionals, top athletes, college students and travelers on long journeys.  Red Bull is available in more than 165 countries worldwide and more than 5 billion cans were consumed last year, two billion of those in the U.S. alone.  An 8.4 fl. oz. Red Bull contains 80 mg of caffeine, equivalent to a home-brewed cup of coffee.  For more information about Red Bull, visit www.redbull.com/products.

Glassdoor is the leading jobs and career community designed to help job seekers find jobs and address critical questions that come up during the search, application, interview and negotiation phases of employment. Glassdoor provides the most transparent look at company culture, work environment, salary and compensation and the interview process thanks to the millions of insights shared by employees, job candidates and employers. For employers, Glassdoor offers recruiting and employer branding solutions to help maximize talent acquisition strategies and optimize results. As of November 2014, Glassdoor has more than 26 million members, and operates one of the most popular job apps on iOS and Android. Glassdoor, which launched in 2008, has raised about $90 million from Benchmark, Sutter Hill Ventures, Battery Ventures, DAG Ventures, Dragoneer Investment Group, Tiger Global and