Survey: More Than Half of US and Canadian Food Workers Go to Work Sick

A new survey by the Center for Research and Public Policy reveals that more than half of workers in the food industry go to work sick, citing concerns over lost wages and support for their co-workers. 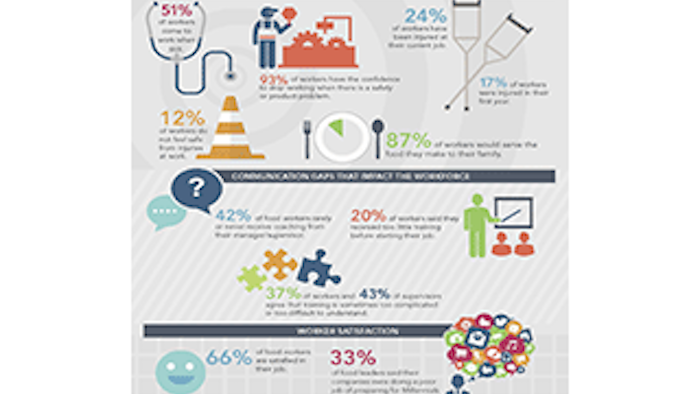 Austin, Texas — As the cold and flu season approaches, a new survey by the Center for Research and Public Policy (CRPP) reveals that more than half of workers in the food industry go to work sick, citing concerns over lost wages and support for their co-workers.

As part of the annual Mind of the Food Worker study, the CRPP polled more than 1,200 food workers at all stages of the food supply chain, including farms, processing plants, cafeterias, restaurants, and grocery stores across the U.S. and Canada. The independent survey was commissioned by Alchemy Systems, which works with companies and organizations across the food system to improve safety and operations.

According to the survey, 51 percent of employees reported they always or frequently go to work when sick. More than 45 percent said they go to work sick because they can’t afford to lose pay. More than 46 percent said they didn’t want to let their co-workers down by not showing up for a shift. When managers were asked how many employees they thought came to work sick, the majority answered just 18 percent.

Over 20 million U.S. and Canadian frontline food workers grow, process, distribute, cook, and serve the food that is eaten by over 355 million consumers every day. They are the vital link of a complex food system from farm to fork.

The same survey also showed that 87 percent of frontline workers would serve the food they make to their families and children.

“The vast majority of frontline food workers and their employers are committed to providing safe foods for their customers,” said Alchemy CEO Jeff Eastman. “The survey shows that over 90 percent of food workers feel responsible for the safety and well-being of their customers. So managers and supervisors need to better communicate why it’s okay to stay home when sick.”

The Mind of the Food Worker study seeks to increase the food industry’s understanding of frontline worker attitudes and behaviors. The survey also asked workers about their workplace safety experiences. Notable findings:

“While these findings are positive overall, there is always room for improvement,” Eastman says. “For example, while 93 percent of workers feel confident to stop work when they see a safety problem, it still leaves 7 percent of 20 million workers who do not. When it comes to safety, that number needs to be 100 percent.”

View full results of the Mind of the Food Worker study.

About CRPP and the study

The survey was conducted of 1,203 food workers in United States and Canada during July 3-16, 2015. All surveys were conducted using an online survey instrument in English, Spanish, and French. The poll has a +/- 3.0 percent margin of error at a 95 percent confidence level on a composite basis.

Alchemy is the global leader in innovative solutions that help food companies engage with their workforces to drive safety and productivity. Over 2 million food frontline workers at 15,000 locations use Alchemy’s tailored training, coaching, and communications programs to reduce workplace injuries, safeguard food, and increase yield. From farm to fork, Alchemy works with food growers, manufacturers, processors, packagers, distributors, and retailers of all sizes to build a culture of operational excellence.